There is newish trend of artists from the 1970’s and 1980’s going on tour to play classic albums in concert (see U2’s Joshua Tree tour).  It’s not a huge surprise that Elvis Costello has joined that club, but what is somewhat surprising is the album he picked: 1982’s Imperial Bedroom.  It’s not an obvious choice to base a tour on as it doesn’t have any of Costello’s biggest hits.  It didn’t place a single on the Billboard Hot 100, it’s not the 40th anniversary (although 35 is a nice neat year).

So why did he pick it? 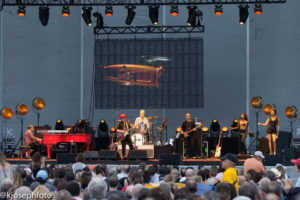 Costello never comes out and truly explains the choice.  And didn’t even open with a song from the album on Monday night at Huntington Bank Pavilion, preferring to open with “On Your Way Down” before getting into the source material.  Costello is too unique to go up there and play the songs from Imperial Bedroom in order, preferring to sprinkle in other songs from the era. 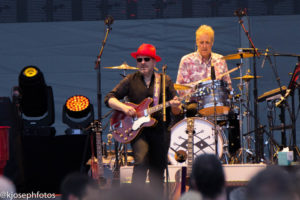 One unsaid reason for picking the album might be that the theme of the album, which Costello described as “romantic melancholy,” remind Costello of the times we are living in. Without getting overly political, Costello did crack “Every song we thought of singing tonight sounded like a satirical routine: ‘Waiting for the End of the World,’ ‘American Gangster Time,’ ‘Brilliant Mistake’ — and this one,” then playing “Accidents Will Happen.”  A not so subtle statement about the election last year.

Elvis was accompanied by keyboardist Steve Nieve, drummer Pete Thomas and bassist Davey Faragher and a pair of female background singers:  Kitten Kuroi and Brianna Lee.  The backup singers added a new level of depth and emotion the songs. 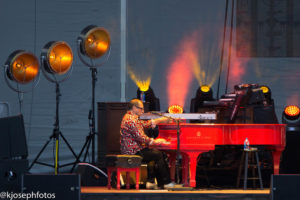 The player that really stood out was Steve Nieve, and not just because he was playing a bright red grand piano.  His piano playing carried many of the songs, but none better than on “Shabby Doll.”

Elvis Costello is the type of artist that you can listen to all night and the 35-year-old album sounded as fresh as when it was first released.  It was a joy that Costello played over two and half hours.  The first encore, in which Costello traded his red fedora for a blue one, was stripped down: just voice and guitar or voice and piano only.  For “Alison” Costello played the guitar with the backup singers gathered around him to form a mini choir.  It was a beautiful take on one of Costello’s biggest hits.

The second encore was the total opposite of stripped down.  It was a raucous, high-energy three song climax to the night.  Costello and the band ripped through “Everyday I Write the Book”, “Pump It Up” and “What’s So Funny ’bout Peace, Love and Understanding”. 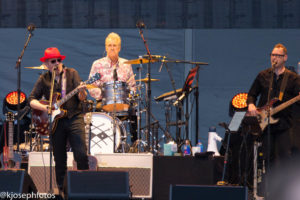 After the show, it became obvious why Costello picked Imperial Bedroom.  Fans have been coming to see him for close to 40 years, some have seen him over 20 times and name their kids after him.  They want to see and experience every part of Costello’s genius, not just the hits.  And the fact is that Imperial Bedroom is one of Costello’s best and most beloved records.