After exploring many tourist attractions in an excessively hot London during our stay in June 2017, we opted for a trip to the English countryside and booked the Stonehenge Tour with City Wonders which included stops in Bath and Cotswolds Villages. We had previously toured with City Wonders in Rome, Venice, and Florence and had been impressed with the knowledge of their guides and the tour details. This tour met our expectations. (See Roman Colosseum, Venice Jewish Quarter, Roman Crypts and Catacombs, and Doge Palace.)

The tour started at 7:30 A.M. at the conveniently located Gloucester Road Underground station. There were 47 folks of various ages on our tour, so City Wonders provided two guides, Liz and Andy, to keep the tour size manageable.

Due to some accidents on the London highways, it took us three hours to reach our initial stop at Bath in Somerset County, an area noted for its hot springs. Our guide Andy told us that Bath was originally settled by the Celts in 55 B.C. but the Romans eventually conquered the area. They built baths in 60 A.D. utilizing the natural hot springs in the area.

Bath became a religious center in the 7th Century after the construction of the Bath Abbey. Our guide Andy told us that Bath became extremely popular to the English during the 17th and 18th centuries after claims for the hot springs curative powers circulated.

Extensive building in the classical Georgian architecture style utilizing uniquely colored Bath Stone began in this period. After the city became a UNESCO World Heritage site in 1993, a law was passed requiring the use of Bath Stone in the construction or remodeling of any building exteriors.

Our group had a choice of visiting the Roman Baths or taking a walking tour of Bath. We opted for the walking tour with Andy who had grown up in Bath and was familiar with its history.

Bath is built adjacent to one of the many Avon Rivers in England. Lovely gardens known as the parade grounds are a prominent feature of the downtown. Bath has received numerous horticulture awards for the garden.

The erratic Avon River caused floods through the years forcing the city to raise its basic foundation in the 9th and 18th centuries. We able to observe the various foundations. The raising of the city created many underground spaces or caves.

The Bath Abbey along with the Roman Baths dominate the main square of Bath. The Abbey was constructed in 700 AD as a Saxon Church, but eventually was knocked down and became a Norman church. King Edgar, the first King of England, was crowned there in 973.

We left Bath and enjoyed an hour drive through the picturesque English countryside through various Cotswold Villages to the town of Lacock.

Lacock was developed in the 12th century and began to grow when the Lacock Abbey was built in 1229 as a nunnery. The Abbey eventually became the property of the Fox Talbot family who owned the Abbey as well as much of the city. In 1944, the family turned their holdings over to the British trust which now manages the city.

The National Trust of Britain is dedicated to preserving and maintaining the village in its original form. Visitors will not see any power cables, yellow lines, street lights or TV aerials in the village. It is a open museum. Hence, the city has become very popular with movie producers and tourists. Movie crews often take over the entire village. 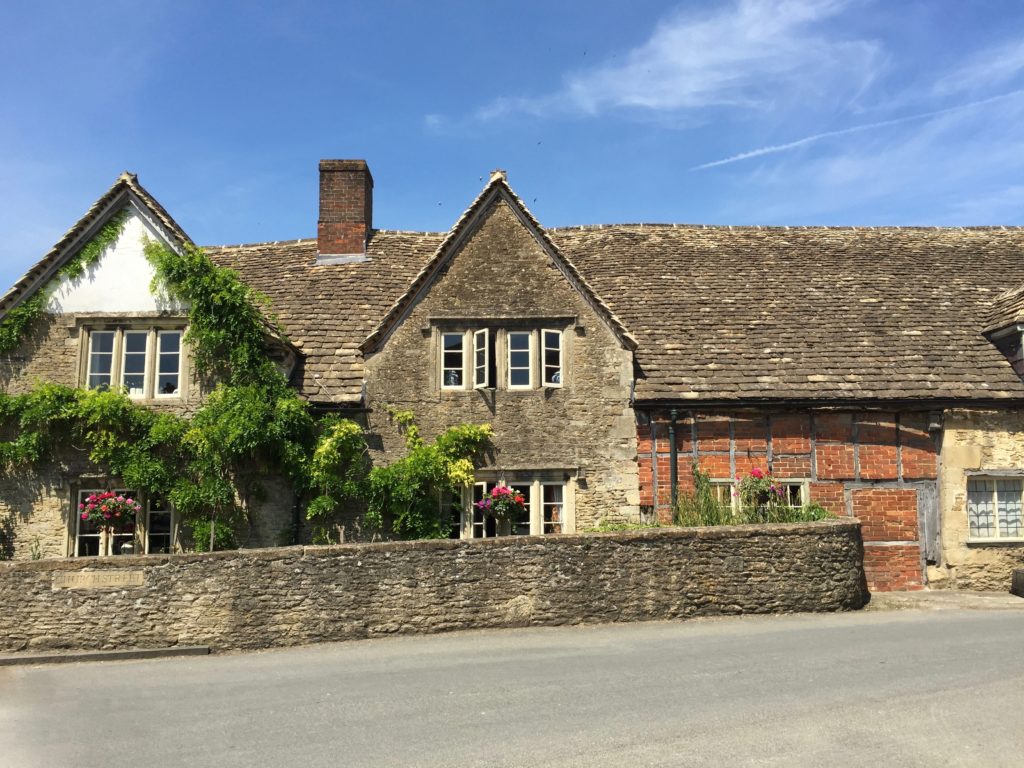 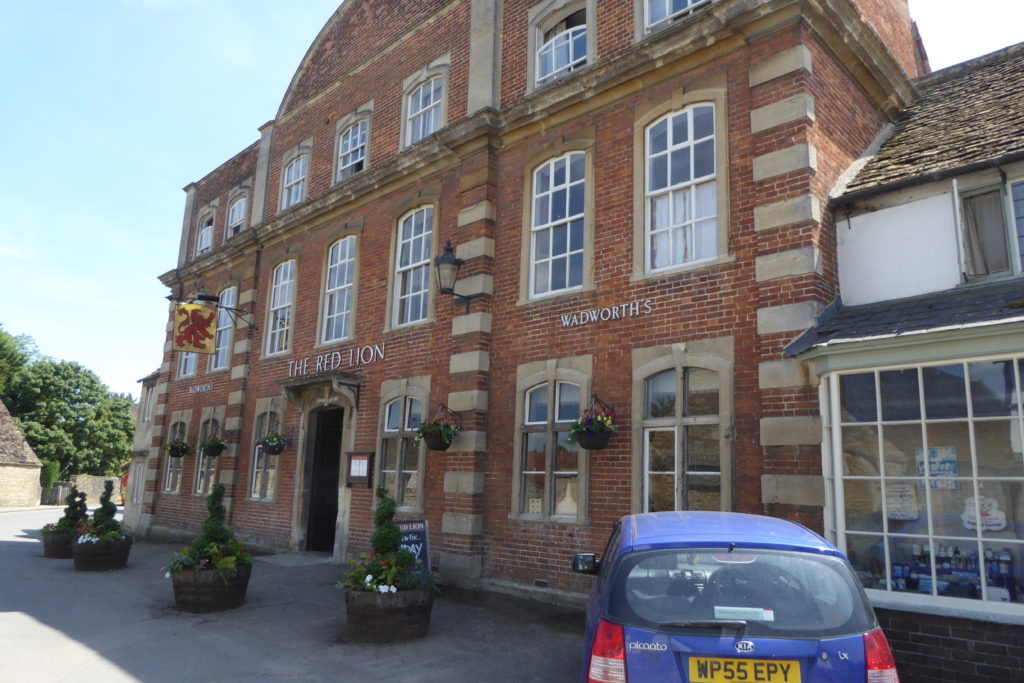 We enjoyed seeing some of the well preserved medieval homes. Our visit concluded with a English lunch at the Red Lion Inn complete with a glass of the local hard apple cider. There were actually four variations of the cider available

Next, we traveled through the countryside to Stonehenge – the highlight of our tour. Stonehenge is one of the most famous landmarks in the United Kingdom (UK) and is regarded as a British cultural icon. It has been legally protected since 1882 and is a UNESCO World Heritage Site managed by English Heritage. The site and surrounding area is always crowded with tourists.

City Wonders had arranged for a slotted time for our group to have immediate access to this tourist site. We quickly exited our air-conditioned bus meeting with record high temperatures. Fortunately, a steady wind on the Salisbury Plain helped cool us off a bit.

We split into two guided groups and took the next shuttle bus. Our guide Liz reviewed most of the theories – many of them conflicting – regarding the builders and purpose of Stonehenge. The site consists primarily of a ring of standing stones, some weighing as much as 50 tons.

Archaeologists believe the huge rocks were placed there between 3,000 and 2,000 BC. The interlocking systems of the stones and complexity in placing them at that time period beg the question—who built it and why was it built there.

Many ask if it might have been built by aliens. Our guide and many historians feel that it was built by a race of Neolithic men who have left no written trace of their history.

Burial pits found in the area suggest that the space was an ancient burial ground or a possible healing center. It may also have had something to do with farming or perhaps ancestor worship.

We visited the site two days before the summer solstice when the rays of rising sun are directed into the center of the Heel Stone at the extremity of Stonehenge. Our guide told us that in excess of 20,000 visitors flock to Stonehenge that day – sort of like Woodstock revisited in England. Port-a-potties filled the field surrounding the stones in anticipation of the crowds.

After spending time in the heat and humidity, it was good to return to our air-conditioned bus for the trip back to London, During our two hour drive back, we were able to reflect on our day.

There’s much more to see in Great Britain in addition to London. We were able to see remainders of the history of the area dating back to 3,000 BC and continuing through Roman and Medieval times up to the present. City Wonders did an excellent job of organizing the tour and provided guides with a depth of knowledge. If you are visiting London, check this tour out or any of the other various tours they offer.

August 23, 2018 Suzanne Magnuson Hotels & Resorts 0
Spread the love
Spread the loveA great many hotels have imposing or elegant-sounding names in an effort to dress up a bad location or poor amenities, but you’ll find nothing of the kind at the Radisson Blu Edwardian. […]

February 21, 2017 Dianne Davis Worldwide Attractions 0
Spread the love
Spread the love By Dianne R. Davis and Burt Davis  Our Voyages to Antiquity cruise began in Venice and took us to stops in Ancona, Italy, Split, Croatia and then Dubrovnik before going on south […]

The Wizard of 22nd Street

August 24, 2021 Tony Sportiello Attractions 0
Spread the love
Spread the loveIn times of trouble, plague and Covid who better to turn to than the Wizard of Hogwarts? Such must have been the thinking behind the flagship Harry Potter store at 22nd and Broadway […]