On September 23, 2017, the MC-10 Playwrights Ensemble, Greenhouse Theater Center’s newly formed collective of ten mid-career and established playwrights, partnered with the American Civil Liberties Union to create Use It or Lose It: An Evening of Short Plays About Your Rights. Drawing on both landmark cases taken on by the ACLU and the broader topic of civil liberties, each of these ten playwrights wrote a piece that explored human rights issues and the ways they impact every one of us. All proceeds from this event supported the ACLU.

With the increase in widespread attention and support the ACLU has received in the months since Trump’s election, it’s no surprise that artists, many of whom are outraged by the myriad injustices enacted, attempted, and promised by the Trump administration, have taken to supporting this long-standing American civil rights organization. In April, a group of artists, including many members of the Chicago cast of Hamilton, performed in a benefit concert for the organization. It feels appropriate, then, that this newest addition to the Greenhouse Theater Center’s producing arm would kick off its existence with a benefit for the ACLU. 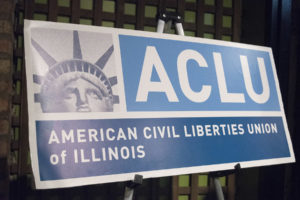 The evening’s plays covered a broad range of topics, from the nasty “Muslim ban” enacted early in the Trump presidency to the reality of motherhood in prison to the rights of the mentally ill, the use of the death penalty, and beyond. Each of the plays had something important and powerful to say and, with one exception, all said it successfully.

In Hold On by Julie Marie Myatt, the character relays to the audience a question her young sister asked her: what do your rights feel like? It’s a difficult question to answer in the positive; it’s much easier to understand what the absence of rights looks and feels like, and the idea of “feeling” one’s rights while they’re still there is a fascinating one. But Myatt didn’t explore the question in the positive. Instead, the performer targeted a single audience member (later revealed to be an actor) and demanded she move out of her seat because the unnamed powers that be had declared it wasn’t hers, while the “audience member” refused to move. 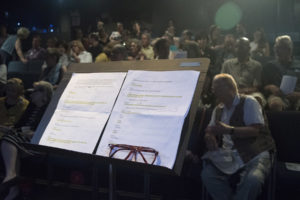 Eventually, the uncomfortable and at times aggressive scene ended with the actor declaring “maybe that’s what it feels like.” Is the understanding of “what rights feel like” supposed to come from the act of resistance itself? It isn’t entirely clear, and the scene instead read as creating audience discomfort for its own sake. Additionally, while the production did well by including a diverse cast of actors, the choice of a black woman for the one piece in which overt anger was directed at the audience seemed to lean into stereotype in an unfortunate way.

Phillip Dawkins’ piece, Wonder Never Ceases, brought a real-life service dog onto the stage to “narrate”, through the help of actor Dana Black in the sound booth, the true story of a little girl whose elementary school denied her the use of her service dog, a decision that the ACLU successfully overturned. The piece was charming in its pseudo-doggy language (the suggestion that the ACLU deserved a treat for its good work, for example) and also moving, in the simple and sincere language it used to describe the unfair treatment of a seven-year-old just trying to get an education.

Another highly successful piece was On the Clock by Tanya Palmer, in which a single mother outlined in excruciating detail the steps she had to take to end an unwanted pregnancy. The down-to-Earth charm of the central character, as well as her habit of making lists to cope with the increasing obstacles facing her on her journey, brought the harsh reality of restrictions on reproductive rights to vivid life and attached realistic human struggle to the lofty idea of civil rights.

Greenhouse Theater Center plans to produce one new work by an MC-10 Playwrights Ensemble member per year, eventually expanding to two per year, as well as additional special projects such as this one. Use It or Lose It provided a glimpse at the incredible work these playwrights can create and the ways that art can effectively explore the social issues that face our world. To learn more about the MC-10 Playwrights Ensemble, visit the Greenhouse Theater Center’s website.

All photos by Alex Higgin-Houser.

January 20, 2019 Jessie Bond Entertainment 0
Spread the love
Spread the love Parenting is messy, difficult business under any circumstances, but it’s especially tricky when you’re navigating the relatively uncharted waters of being a married gay couple with kids. The world of gay parenthood […]

Her Majesty’s Will Review – Swashbuckling Shakespeare

Bright Half Life Review – A Kaleidoscopic Journey through Love, Loss, and Everything In Between