It’s one thing having a BAD date.  That you can deal with.  It’s totally another thing having a famous dead writer, bursting in your private bedroom, dragging a coffin no less.  And, it’s just not your normal bedroom.  This bedroom belongs to famed poet Emily Dickinson; and, she’s home. This is certainly not your typical home invasion.

Edgar & Emily opened up to a full-house audience at one of the most stunning theaters in Florida, The Don & Ann Brown Theatre, on March 31st.

Palm Beach Dramaworks productions never disappoint and, on this opening night, once again, the audience left with lots to talk about – mostly everyone’s personal interpretation of Edgar & Emily. What was in common, that everyone loved it. 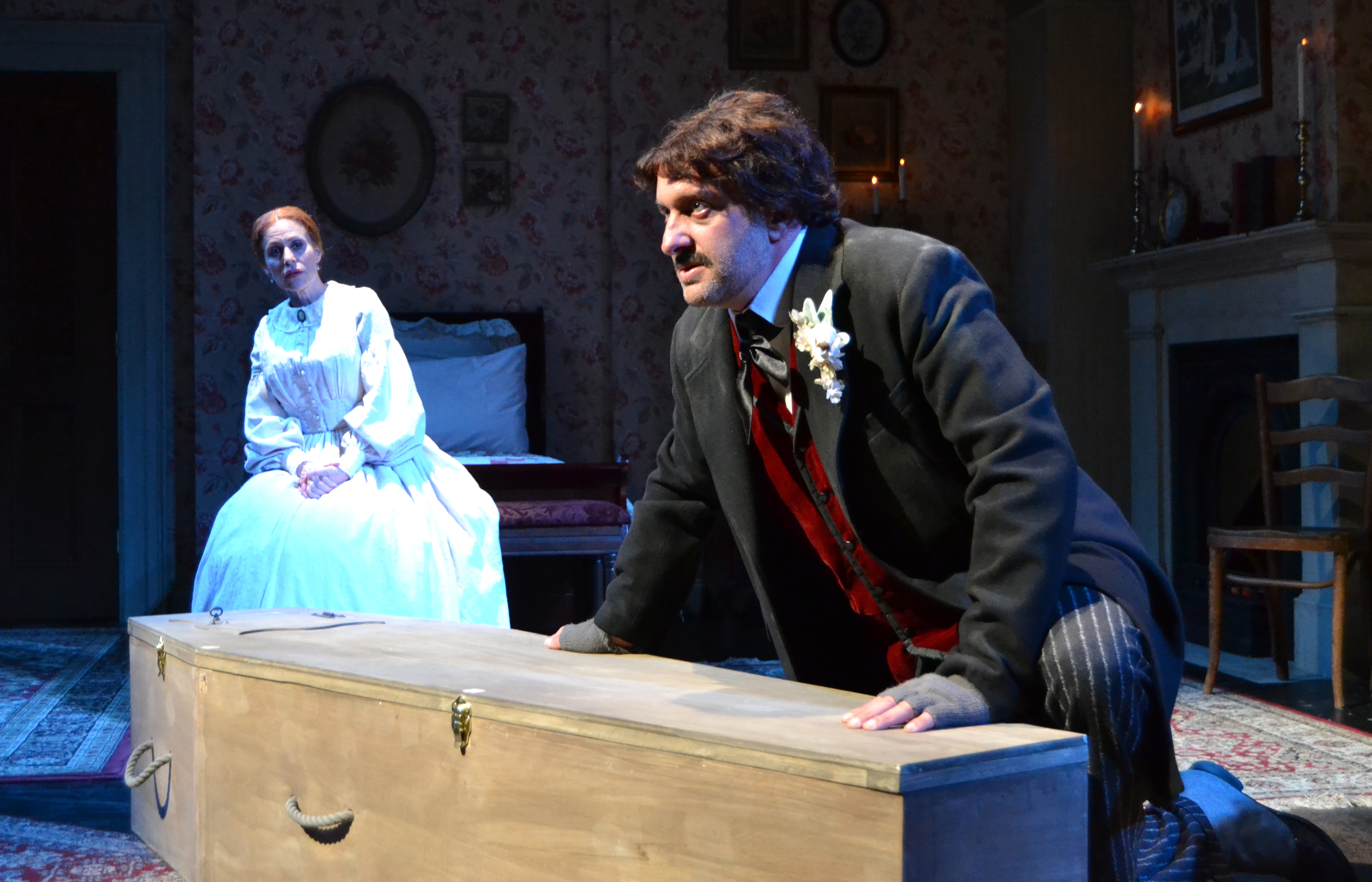 Dickinson and Poe were two literary giants, American originals, born in Massachusetts in the early nineteenth century. Although they lived very different lives, they had certain fundamental things in common. They were both tortured souls who could not escape their demons. They both wrote frequently about death and sorrow and loss, yet they seemed to derive their greatest pleasure from their work.

To experience what ‘could have’ been a meeting between a recluse and a madman-on-the-run, both in love with their own wit, sensitivity and their excellence in putting words on paper, made for a very interesting and thought-provoking experience.  And, I must say, I learned much about both characters (and characters they were). 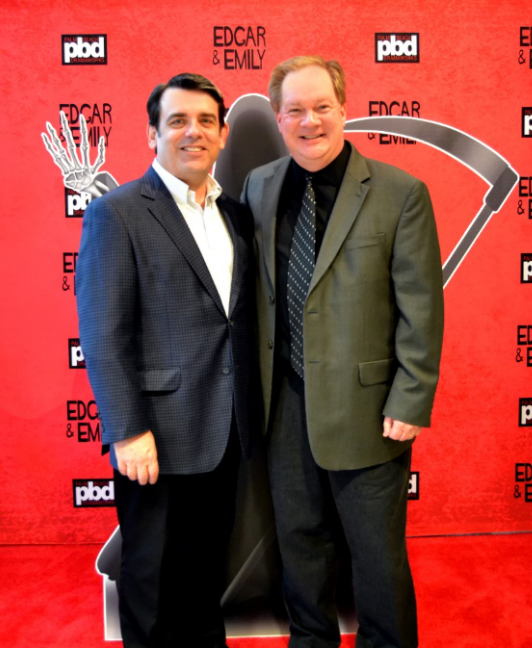 Dickinson was, for most of her life, bound to her home.  She barely left and was especially attached to her poetry, most of which was scattered in different parts of her bedroom; maybe she hid her poetry in case someone wanted to ‘read’ her work or possibly she was afraid of someone else reading her poems.  She always wore white and wanted to be buried in white.  Well, she could have had the chance as Edgar A. Poe burst into her room with just the perfect coffin.

This was, of course, a fantasy.  But, other than the impossibility of a real-life meeting, there was a lot of truth and similarities in both of these tortured souls as they eventually discovered after Edgar realized that Emily didn’t want to ‘’sleep with him,’ but ‘just talk.’  And ‘just talk’ they did.

Of the 70 short stories that Poe wrote, one third were comedies and only a dozen were horror stories.  I only know Poe from his infamous horror stories and up until and including this show, The Raven still shakes my soul.  Interestingly enough, Ms. Dickinson had a copy of The Raven in her bedroom and she read portions of it to the author as she pokes fun at his attempt to ‘rhyme’ words.   “You rhymed ‘lattice’ with ‘thereat is’?” she says. “It’s no wonder someone is trying to kill you.”

Joseph McDonough, who brought this story to the stage, says this is a ‘true story that never happened,’ and a very humorous one.  McDonough waited several years for Palm Beach Dramaworks to read and produce his play, and, according to everyone I spoke to after the show, the wait was worth it.  Thank you, Mr. McDonough, for using your imagination and research into a wonderful play that was very real to me. 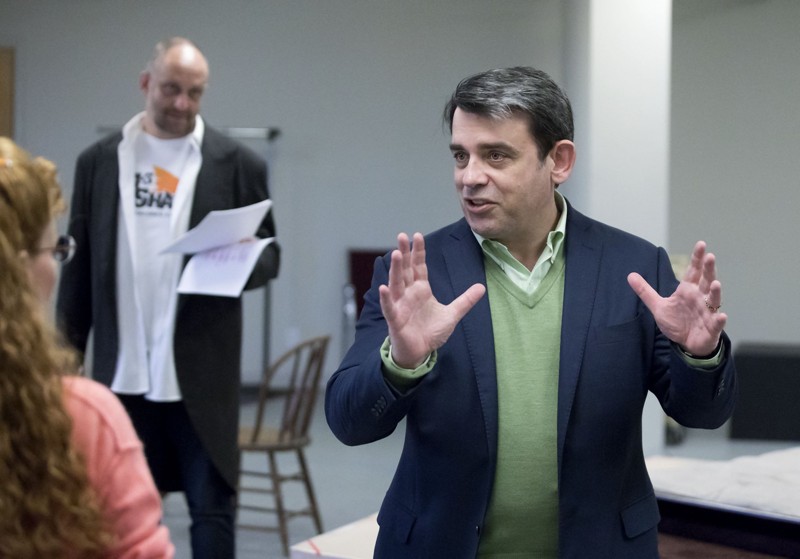 It’s a learning experience and a laughing experience.  I found myself looking up poetry by Dickenson today to begin to ‘read into’ her work and see the similarities that I experienced on opening night.

That always happens when I review any production by Palm Beach Dramaworks.  Their productions always evoke conversation.  That is what plays should do.

Palm Beach Dramaworks is a non-profit, professional theatre and is a member of the Theatre Communications Group, the South Florida Theatre League, Florida Professional Theatres Association, and the Cultural Council of Palm Beach County.

The Don & Ann Brown Theatre is located in the heart of downtown West Palm Beach, at 201 Clematis Street. For ticket information contact the box office at (561) 514-4042, or visit palmbeachdramaworks website.

April 14, 2020 Splash Staff Health, Fitness & Sports 0
The Head and Neck Cancer Alliance launch their 22nd Annual Oral, Head, and Neck Cancer Awareness Week (OHANCA) in April.  You might not realize it, but some of our culture’s most beloved figures have died from […]

August 12, 2019 Burt Davis Cruises & Tours 0
I’d never heard of the town of Korsakov or the island of Sakhalin, but our time there proved to be memorable. The visit to this Russian community in the spring of 2019 was a stop on our Viking Ocean […]

May 17, 2019 Stephan Martin Events 0
The 13th annual Vegas Uncork’d by Bon Appétit, presented by the Las Vegas Convention and Visitors Authority, kicked things off on May 9th as Chef Bruce Bromberg sabered a magnum of champagne at Boulevard Pool […]