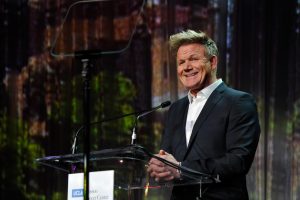 The Italian-themed evening was hosted by Gordon Ramsay, Multi-Michelin Star Chef and Star of the FOX series “MasterChef,” “Hell’s Kitchen” and “24 Hours To Hell & Back,” and Telegdy’s award was presented by Matt Iseman and Akbar Gbajabiamila, hosts of the NBC’s Emmy-nominated “American Ninja Warriors.” The evening also featured a thrilling performance by global superstar, three-time Grammy Award-winner and Coach on “The Voice,” Kelly Clarkson!

The star-studded evening commenced with interviews and photo shoots on an active red carpet. Grandly attired guests poured into the elegant hotel reception area and enjoyed offerings of wine and culinary delights before the event commenced in the dining area, where tables were set to perfection! Taste for a Cure unites the entertainment and epicurean communities and consistently ranks among the top ten culinary events in Southern California.

Some personal cancer-themed stories were related and videos screened—of heartwarming survivals and remissions, but also of some who sadly lost the battle. The importance of the JCCF was not lost on the guests who rose to the challenge of donating and bidding generously during the fund-raising auction!

At NBC Entertainment, Telegdy oversees NBC’s unscripted series, including such major franchises as “The Voice,” “America’s Got Talent,” “American Ninja Warrior,” “Ellen’s Game of Games,” the “Golden Globe Awards,” “Little Big Shots,” “Hollywood Game Night,” “Running Wild with Bear Grylls” and “The Macy’s Thanksgiving Day Parade.” His purview also includes oversight of first-run syndication, as well as business affairs and production for unscripted and specials programming. In 2016, Telegdy launched Universal Television Alternative Studios and appointed Meredith Ahr as President, which produces hits such as “World of Dance,” “The Wall” and “Hollywood Game Night,” as well as the upcoming Amy Poehler and Nick Offerman hosted “Making It,” Chris Hardwick helmed “The Awesome Show” and Dwayne Johnson led “The Titan Games.” An active philanthropist, Telegdy is dedicated to supporting the JCCF and its mission. He also oversees the annual global philanthropic event Red Nose Day, organized by Comic Relief and broadcasted across NBC Universal to raise awareness and funding to end child poverty in the U.S. and around the world. Prior NBC and Universal Television Studios, Telegdy served as an executive at the BBC.

“This is a monumental year for the Foundation as we have welcomed Dr. Michael Teitell as JCCF President and Director and celebrate our 23rd anniversary of Taste for a Cure, established to raise money for highest priority cancer research that has culminated in the remarkable achievement of 9 FDA approvals over the past 4 years,” said JCCF Chairman, Randy Katz. “We are excited to present Paul Telegdy with the Gil Nickel Humanitarian Award in recognition of his dedication to inspiring those who battle with this disease. Through his platform at NBC, he has worked to shift the narrative around the cancer struggle from one of anger and defeat, to that of encouragement and bravery.”

Founded in 1945, the UCLA Jonsson Cancer Center Foundation (JCCF) is the single most important vehicle for raising private funds for cancer research at UCLA. It supports a number of high priority cancer research efforts, focused on converting laboratory discoveries into more effective therapies for cancer patients. UCLA Health is ranked as the leading adult cancer center in Southern California, by U.S. News & World Report. The UCLA Jonsson Comprehensive Cancer Center’s dedicated researchers are recognized as international leaders in the discovery of new and better ways to prevent, detect and treat cancer.

October 21, 2020 Elaine Mura Online Entertainment 0
Spread the love
Spread the loveHostess Juliette Jeffers has decided to give the Sistas equal time following the successful debut of the Brothas a few weeks ago. Like the earlier show, SISTAS SPEAK! is a potpourri of words, […]

September 15, 2017 Stephan Martin Celebrity Gift Suites 2
Spread the love
Spread the loveDoris Bergman and Emmy Week have become synonymous as her Eighth Annual Style Lounge & Party in Celebration of Emmy® Season was once a again a must visit for Emmy Nominees, former Emmy […]

April 20, 2021 Barbara Keer Online Entertainment 0
Spread the love
Spread the loveFollowing on the heels of Earth Day is Shakespeare’s Birthday.   The Chicago Shakespeare Company celebrates the bard’s birthday in style. Come join the celebration. Tune in for a night of performance, broadcast from […]