Handed down through generations, “it is a story that all Armenians carry” says writer Leslie Ayvazian. According to several reliable sources, during the last century in April of 1915 the Ottoman authorities, their troops and additional secret outfits began forcibly removing the Armenian people from Anatolia to Syria. Many were sent into the desert, perishing from thirst and hunger. Others were methodically massacred throughout the Ottoman Empire, with women and children abducted and abused.

Universal in scope, Leslie Ayvazian’s play “100 Aprils” mines the seeds of hope from a truth that must eventually be acknowledged for healing to commence. She has spent much of her career making sure that the story doesn’t get buried, and is perhaps one of the most noted Armenian playwrights along with Eric Bogosian. Leslie is the author of eight full-length plays and seven one-acts, published by Samuel French and Dramatists Play Service. Her play “Nine Armenians” won the John Gassner/Outer Critics Circle Award for best new American play, The Roger L. Stevens Award, and received second place for the Susan Smith Blackburn Prize. Produced in Los Angeles at the Mark Taper Forum it was directed by Gordon Davidson. 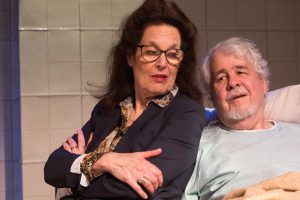 The world premiere of “100 Aprils” at Rogue Machine in Los Angeles offers a darkly comic look at the generational consequences, and insanity that occurs when history is denied. The lead character, John Saypian, is a modern-day Don Quixote. He and his family are second generation Armenians whose parents escaped the Genocide. John believes that a tormentor is pursuing him. But, is the enemy a haunted memory from his childhood or is he real?

Ester: Did this story come from a personal experience?

Yes, from growing up in an Armenian family. My father was born in Turkey and escaped to NYC. Much of what I know of the genocide is what I’ve learned from my grandmother and my father’s stories, and even from his silences. Some things were too horrific to fully articulate. He and my grandmother would talk, and sometimes just drift off looking out the window. As a physician, my father carried this sorrow throughout his life. So, yes it is very personal. But, most people from Armenian families all have a version of this story.

Ester: Is it cathartic for you, the process of recalling difficult experiences that inspire your writing? How about when you finish a play like this?

Leslie: If you mean cathartic, as in something you go through and then it makes you feel better? I would say no. The vigorous work on this play was good for me. But, I don’t know that it made me feel better. It’s more like I did something that I was called upon to do. I’m a writer and I felt that I was representing the Armenians that I know, and I was inspired to begin it for the Centennial of the genocide in 2015. I’m glad that I did it but it was hard to do. It took me five years, and it’s only 75 minutes long. So, that’s a lot of thought going into a short play. Thinking about every word, every line, creating a surreal and very real world. That’s the world that my father lived in. He lived in a real world with hallucinations from his past.

Ester: What were the biggest challenges you faced in getting this piece started. How about in getting it produced?

Leslie: Hmm, I guess, getting it started as a story without much sweetness. Most people define love through sweetness. But this play has vigor and brokenness in it, so that was the challenge. It was hard for me to create the three distinctive family members, and I wanted a strong Turkish character as well. I interviewed Turkish people that I know, and some friends. All of them were deniers of the genocide, so that was very, very hard for me, after growing up reading the journals and seeing photos from my own family that was slaughtered, and then hearing these people say no, that never happened. By FAR, that was the biggest challenge.

As far as getting it produced, the challenge was getting the RIGHT place to produce it. I wanted somebody who could see the life of this play, and I wouldn’t have to explain it. The piece lives in reality and hallucination and John Flynn immediately saw that, he was the right person, and Rogue Machine is the right place. It was a great match.

Ester: Are you already creating the next one? If so, what can we expect?

Leslie: I’ve created a one-person show called “Mention My Beauty.” It’s a story about growing up in the 60’s as a pretty girl and not understanding feminism. About trying to develop a voice as a woman. After “100 Aprils” I’m heading to the New York Theatre Workshop in residence at Dartmouth, because they invited me to work with them, for a week, on this new solo piece. Then, it’s on to New York with other possibilities in the works for the show.

Another project, “Woman in Language” is a series that I’m hoping to get filmed. It’s focuses on all the language we have about women, and how we prevail anyway! I worked with young women, in their 20’s, at Columbia. We’ve come up with 435 words that only apply to women, and they’re not flattering.

I invite a panel of 10 women in their 70’s, 80’s, and 90’s who answer questions from the younger women about how they prevail, despite all the language they’ve had to listen to all of their lives.

June 13, 2018 Elaine Mura Entertainment 0
Playwright Leslie Ayvazian’s 100 APRILS premieres in 2018, just three years after the centennial commemoration of the Armenian genocide. First presented in a staged reading at the Kirk Douglas Theatre in April 2015, 100 APRILS has […]