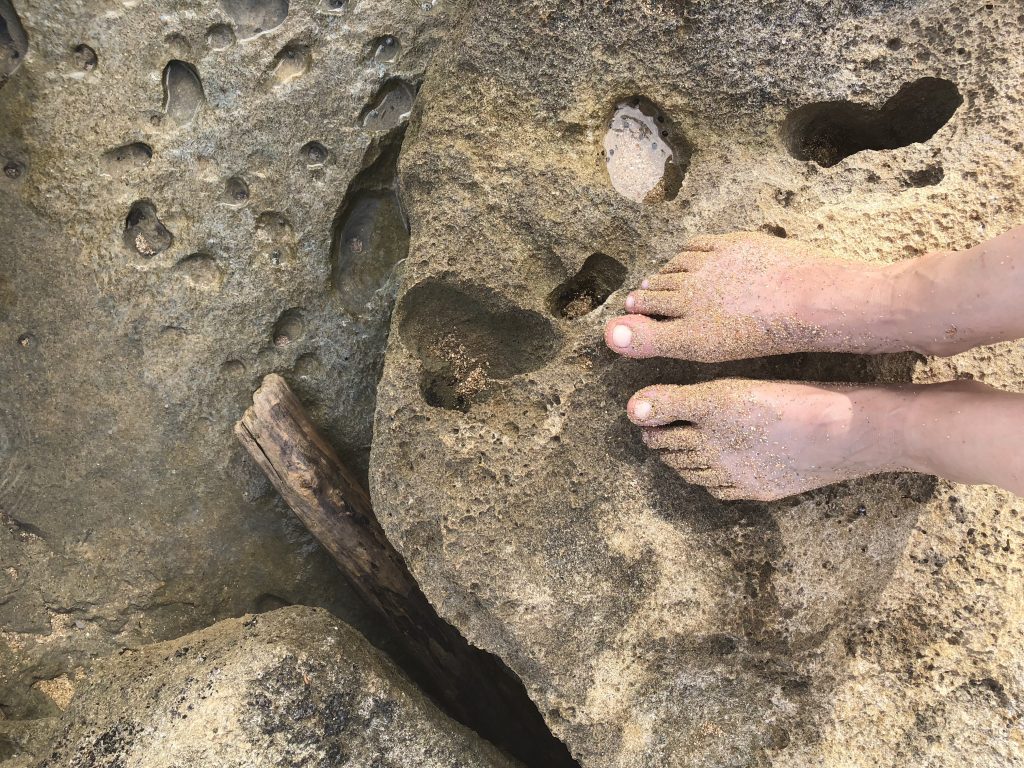 School was letting out for my son, my husband mentioned a medical conference he was interested in attending, and I thought quest! A happy coincidence when the destination is Hawaii, and an opportunity to cover Kauai was born.

Was it possible to put together a trip on the fly? Typically, I plan like mad in advance detailing every waking moment.  I am just that type of gal, the mind and body always in perpetual motion. Was it possible to travel as a Vegan? A state known for it’s hog farms and Spam and where the term “free range chickens” could have been coined, as chickens and roosters naturally roam and claim the island as their own. Talk about “ruling the roost”!

I had never been to Kauai only Oahu and the Big Island, this was finally my chance to ignite the adventurer in me and literally get down and dirty. Our first day began with an early morning walk, and I mean early as we were still on Pacific Standard Time, along Coconut Beach in Kapaa, Kauai. Entirely by good fortune we found Lava Lava Beach Club a throw back to the feeling of Gilligan’s Island in that it resembled a playful watering hole equipped with ocean views, corn hole tosses and ladder ball for your entertainment pleasure.  The food was delightful and only the bill was served in a can of Spam!  We then jumped on bicycles to ride the eight mile scenic stretch traversing Kealia Beach. Along the way we stumbled upon a detour.  A trellised tunnel of foliage where light shimmered through like crystals where we climbed up to a beautiful neighborhood. But what goes up must come down and the cruise was magical. Beach access points along the path allowed us to bring our bikes down to the sea. Use caution though when taking a dip as there are strong ocean currents and wind swells in this area. Next stop for the day was to Koloa Zipline Adventures owned and operated by Derek Greene. Housed on the 22,000 acre private property of Grow Farm, Hawaii’s first sugar plantation on Kauai’s south shore. African Albizia trees were brought in to protect the sugar cane from heavy winds and have grown abundantly in the fertile soil making the landscape resemble the savannah so much so that, it was the sight of filming of Jurassic World. Our animated and engaging guides for the tour were Josh and Kekoa.  Our needs (water and snacks) and most importantly safety were meticulously looked after by them during our eight line, three hour excursion as we zipped and tricked down lines at their highest peak of 525 feet. Koloa Zipline proudly offer’s the “Flying Hawaiian” the only face first Superman pose secured zipline. We jumped at the opportunity to try it as well as the allowed inverted position.  It was like an aerial arts class on steroids!  We rounded out our day with a meal at JO2 Natural Cuisine restaurant in Kapaa.  The food was an extraordinary blend of Hawaiian and Pan-Asian.  Our server, Denise, was well versed about plate ingredients and flavor profiles and relayed messages to the chef expediently with any and all accommodations for dietary needs and the like but the menu as it stands, truly needed no alterations. 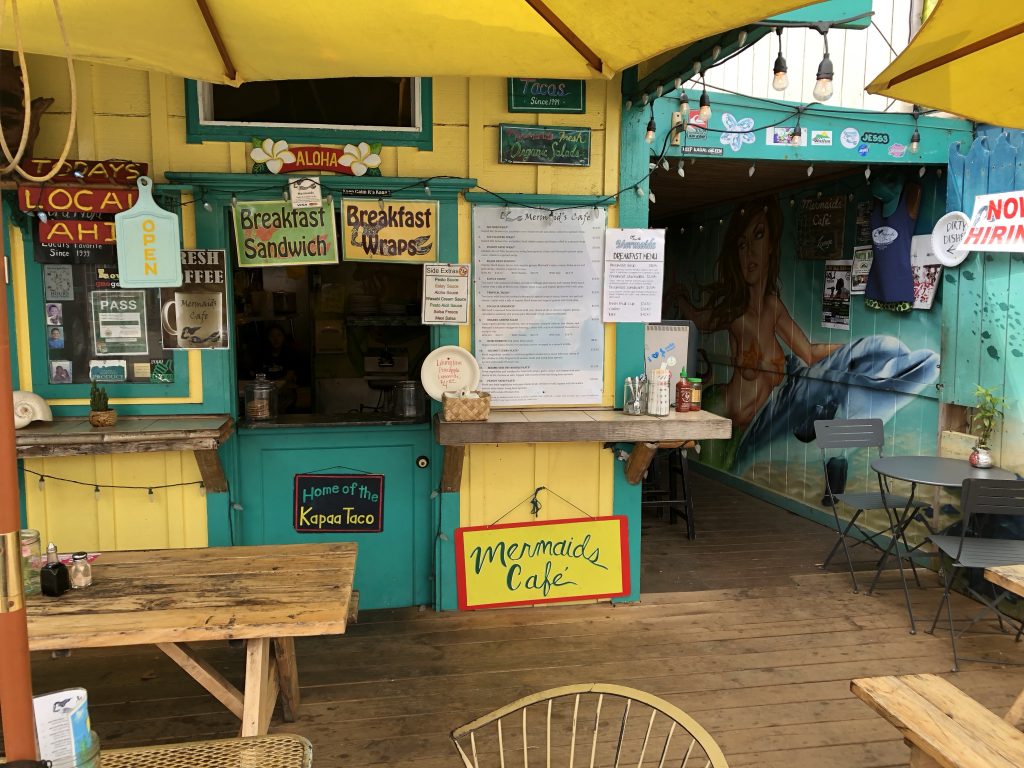 Day two, thankfully did not begin at the crack of dawn.  We were able to explore the village of Kapaa and it’s many cafe’s and boutiques. We landed at Java Kai, a breakfast and lunch cafe for their offering of healthy smoothies and so much more. Attached was a cute boutique called Shipwrecked, featuring high end bathing suits and accessories.  Incidentally, the next door Mermaids Cafe serves made to order Thai inspired clean food which I hit up for lunch after a morning of meandering through mom and pop shops such as Kiko for artisanal natural home goods and clothing. From there it was a quick drive to Opaeka Falls on the west side of Kauai to view the scenery before driving on to, Kauai Back Country Adventures. The Kauai mountain tubing tour too, is set on an old sugar plantation leading down an irrigation ditch system, through open canals and tunnels hand-dug around 1870. Our guides Kainoa and Laki were jovial and Kainoa sang melodic renditions of “A Whole New World” as we went through one tunnel in pitch darkness. Otherwise, each participant had a hard hat on with a head lamp kit to light our way. We ended our day at Papayas Natural Foods and Cafe a gem of a find with the most fantastic vegan salad and soup bar. When you walk in the market, the smell was of fresh pressed fruits and veggies and after a long day in the water the hot soup and other offerings did a body good! 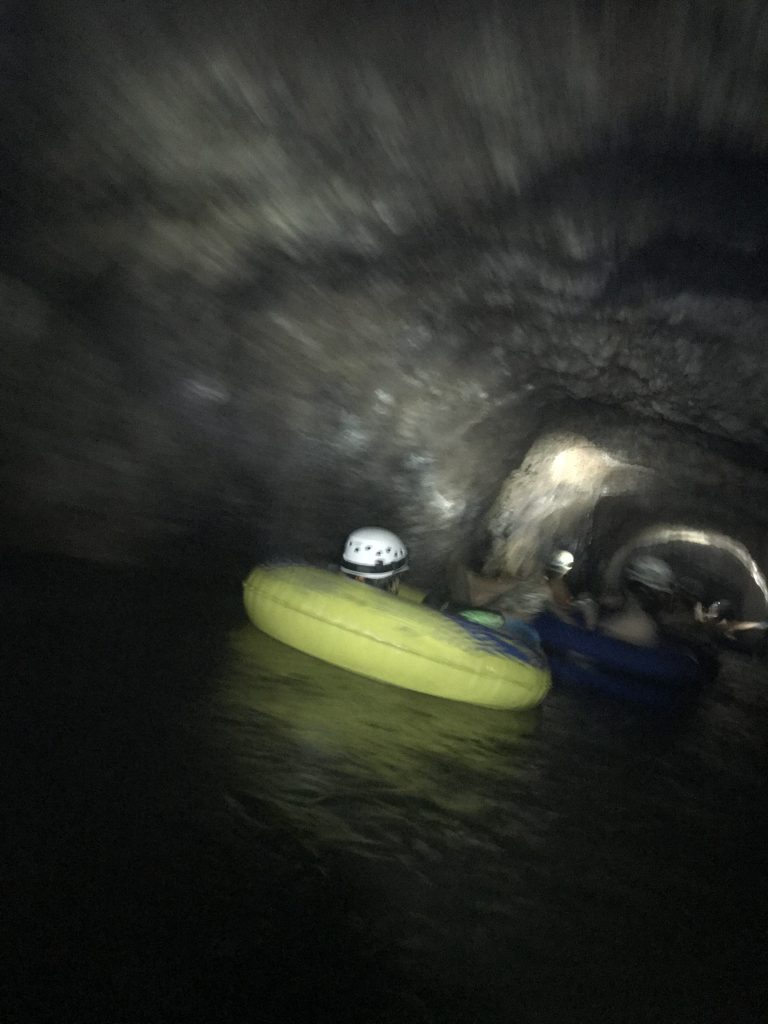 Day three began in the marina with Kauai Sea Tours for a six and a half hour tour of the Na Pali coast line. At the helm was Captain Gregg and guides Nohili and Alex.  Using a zodiac boat we were able to traverse the coast to enter caves and snorkel in remote spots. I was provided with a prescription face mask to view the deep sea! This could be requested in advance unbeknown to me, but lucky for me they had one on board. During our snorkeling adventure swimming side by side with my son, at one with our beautiful environment, we were lucky enough to spot and swim over head to an ancient sea turtle.  Every time the turtle glided we did in turn, and we were swimming synchronously at a peaceful pace. The true highlight of our trip. A special privilege granted by permit by the State Parks to Kauai Sea Tours allowed us to land at Nu’alolo Kai a cultural and archaeological site. Two architectural wonders that stand out and still remain, are a testament to the villages ingenuity. The first Lo’l or walled pool constructed of smooth stones without mortar extends below the natural ground to the water table.  This provided a fresh water well. Unfortunately they planted trees near the well and it eventually suffocated the water source, a fetal mistake and one which cost the village to have to relocate from their safe haven on the beach bordered behind by an immense protective rock wall.  The second such engineering feat which enhanced life in this fishing/farming village in the winter months was the Alapi’i trail which was bridged by a wooden ladder which dangled from the cliff wall shouldering the village to provide access to an adjacent valley.  This way the village was able to trade goods with Nu’alolo’Aina that cultivated taro near by. This village also tied into my son’s 5th grade US history curriculum from this past year where he learned about James Cook. Cook on his voyage found this village. He had observed from the sea the many waterfalls along these shores more then are prevalent today and a bustlingly productive village where if things had gone his way he would have liked to set up a trade agreement for the rope made there of coconut husks.  After a long day, we headed to Poipu to meet friends of ours at, the Beach House restaurant, the perfect location for sunset lighting photos along the coast and a comforting meal. 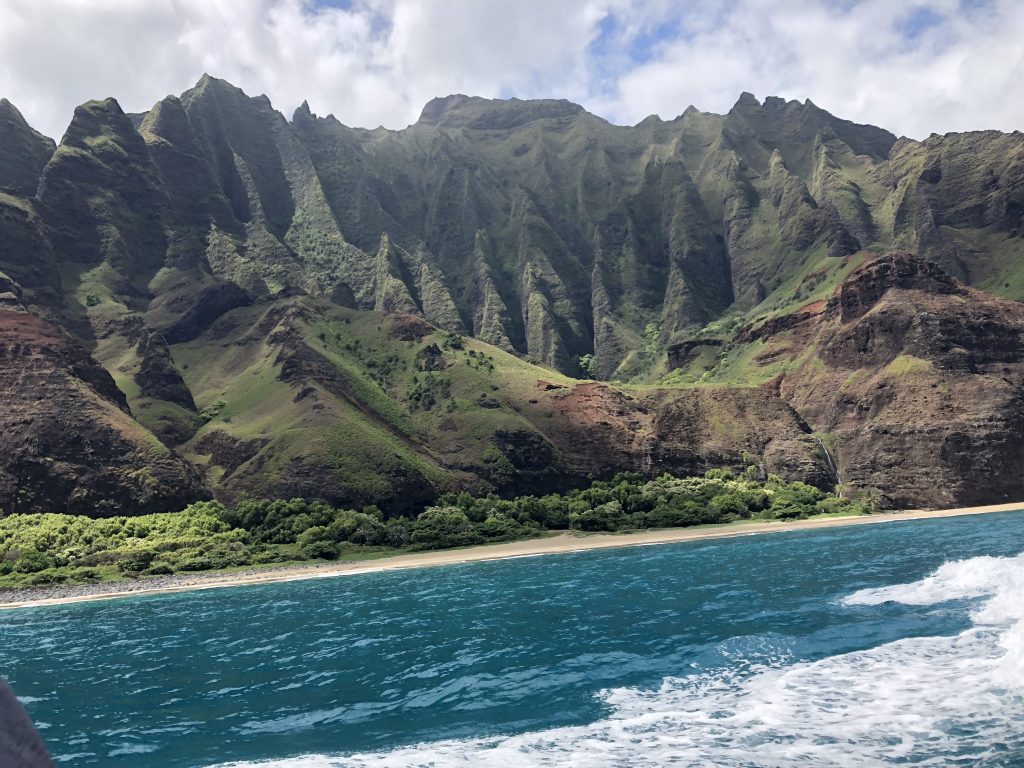 Our flight to Maui was scheduled to leave the following day, mid day.  Our friends encouraged us to have one last hoorah before we left, to visit Queens Bath with them. We strapped on our water shoes for the muddiest hiking adventure through tree roots used as foot hole landings spanning the rain forest down to the coast line. Along the way we saw waterfalls, swimming holes and platform diving. My son and his friends took the plunge jumping in feet first to the infamous Queens bath and finding themselves coming out crowned. They then made their way to the deep dive platforms where they took the challenge of plunging into the sea from one of the lower level platforms. 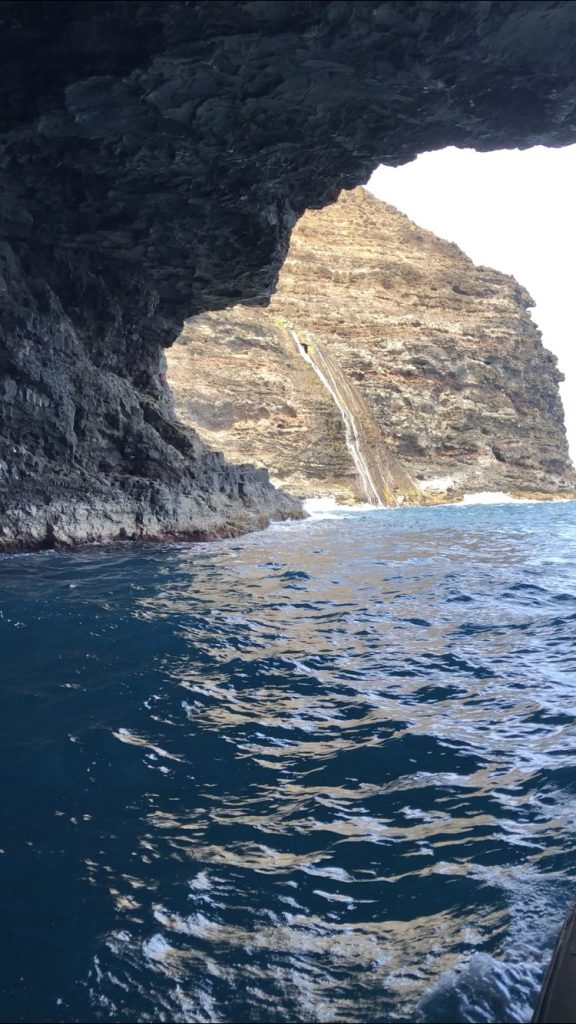 It was a nice reprieve to return to a simpler life style, one unplugged, where we could breathe the fresh air, take in the landscapes, talk and laugh with one another, challenge ourselves physically and imagine being the original inhabitants living off the land.  Our time in Kauai will always be remembered fondly.