Do you want to enjoy a natural habitat? Convene in an area central to art, music and dining?  Foster connections with your loved ones? Then I have the walk for you!  Chicago’s Riverwalk.

Covering six beautifully renovated blocks from the intersection of Wabash and Wacker to the intersection of Wacker and Lake. The Riverwalk is an open pedestrian walkway. A 1.25 mile promenade from Lake Shore Drive to Lake Street with it’s current final end point being Wolf Point.  Appropriate for all skill levels and dogs allowed on leash.  Access to the space is free and open to the public daily from 6am to 11pm. 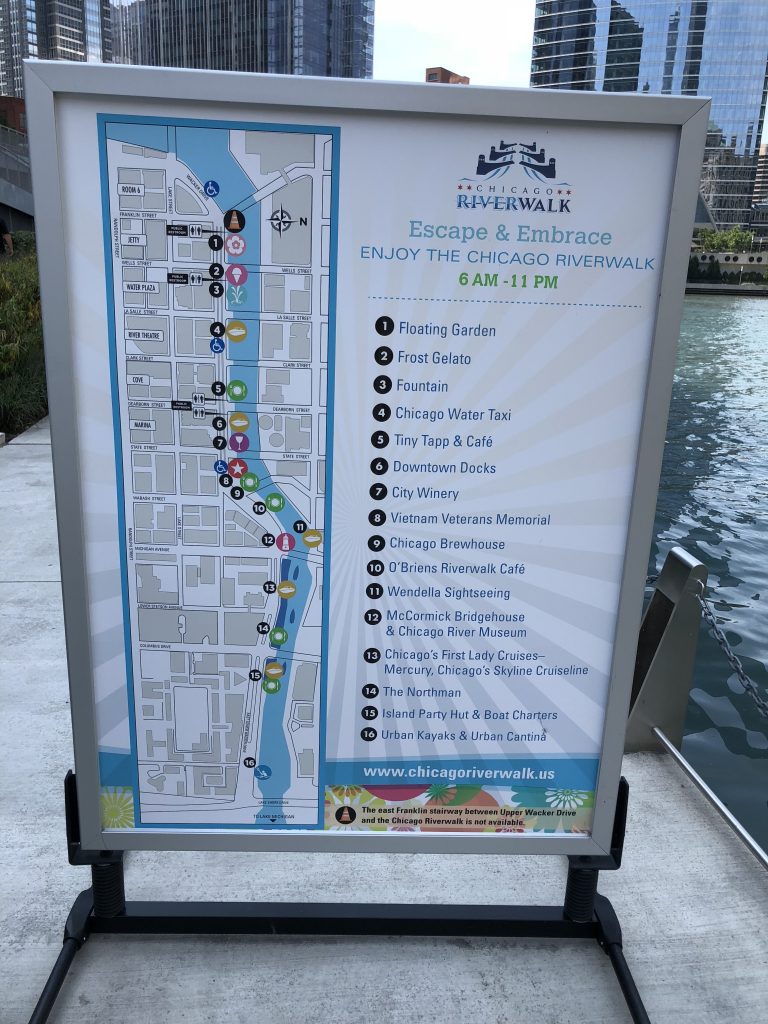 A treat for the whole family, mine was guided by Sharon Novickas through the six “Rooms” or spaces between the bridges of the Riverwalk each with their own vibe. Along the way we were presented with interesting historical facts and tidbits of fun information. Architectural marvels were also featured all along the walk. Especially significant to the landscape are buildings by Bertrand Goldberg and Ludwig Mies Van Der Rohe.

We started at the Vietnam Memorial Plaza the largest memorial outside Washington D.C. then came upon the first room. The Marina as it is called, is a plaza where boaters can dock and set shore to explore. 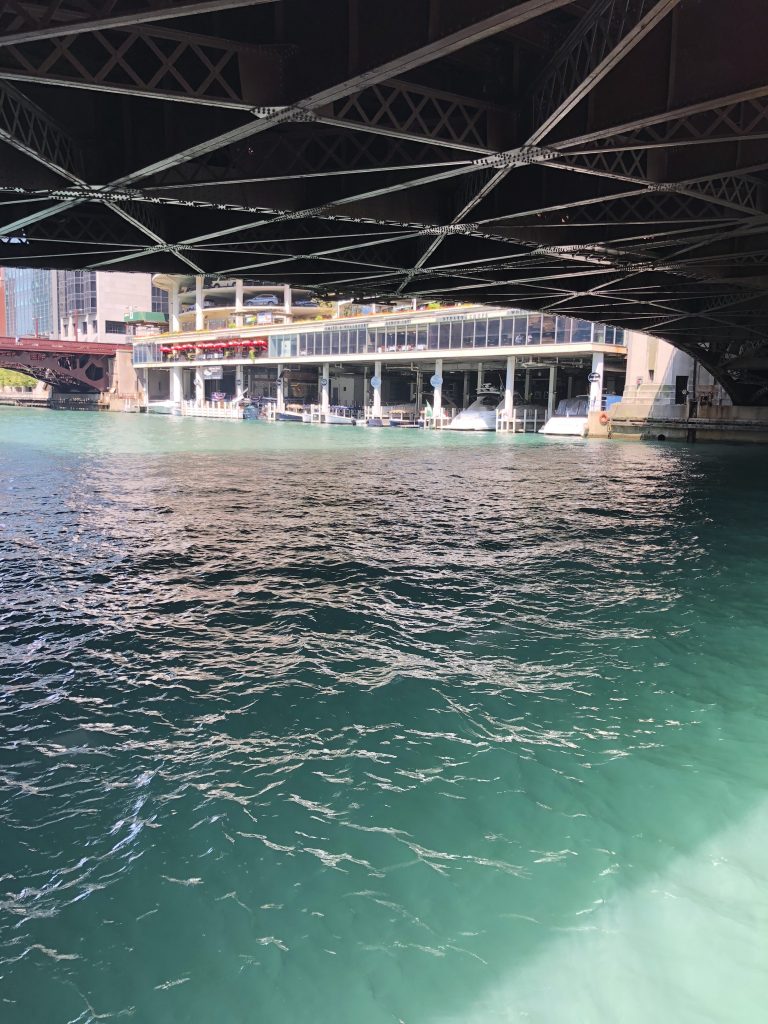 The second along the route, The Cove offers diners many wonderful places to eat. Among the eateries are City Winery Chicago at the Riverwalk, Tiny Tapp Riverwalk, Island Party Hut Tiki Bar and Grill and O’Briens’s Riverwalk Cafe. The Northman, Frost Gelato and Chicago Brewhouse all coming soon.

The Third room is called the River Theater where people can gather with their lunch, catch up and take in the city scape.  This room a now serene place was once the sight of great tragedy. The SS Eastland a cranky top heavy boat toppled here in 1915.  Homage is paid to those that lost their lives that day and to the brave who jumped in to thwart disaster. 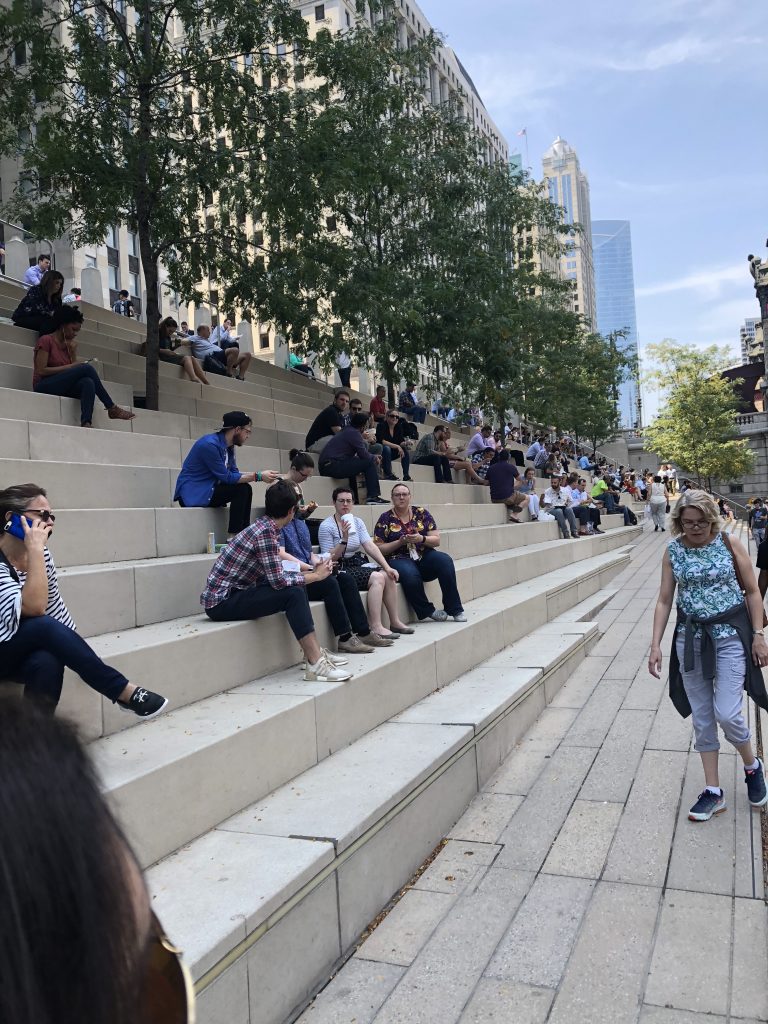 The Water Park is the fourth room and an area where children can frolic and play in water features planted along side the walk.  Between this room and the third, feel free to pick up the Riverwalk Clark Street Water Taxi.  The taxi offers seven stops along the Chicago River.  Also explore life on the water by kayaking the Chicago River Water Trail, many operators available.

Do you like to fish?  Then The Jetty, the fifth room equipped with free equipment dockside is the space for you. It didn’t take all but five minutes for a passerby picking up a rod to make a fresh catch.

The Riverbank boasting floating gardens is the sixth and last room on the tour. At this junction the Y-Shaped symbol ubiquitous with the three river systems that run through the city is imposed in the architecture. Chicago an important location due to the link between the river systems, the Great Lakes, the Mississippi Valley and the Gulf of Mexico puts Chicago on the map as the seventh most important alpha city.  Mayor Emanuel plans to allocate even more money into renovating adjacent neglected areas of the Riverwalk extending from State Street to Lakeshore Drive over the next two years. 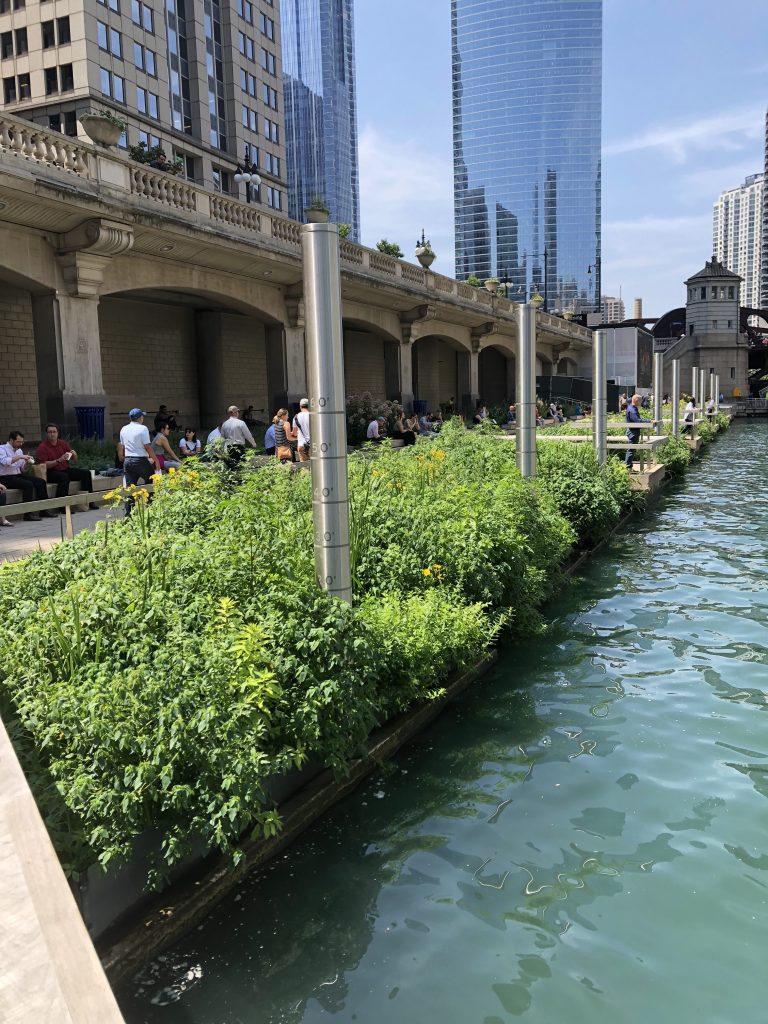 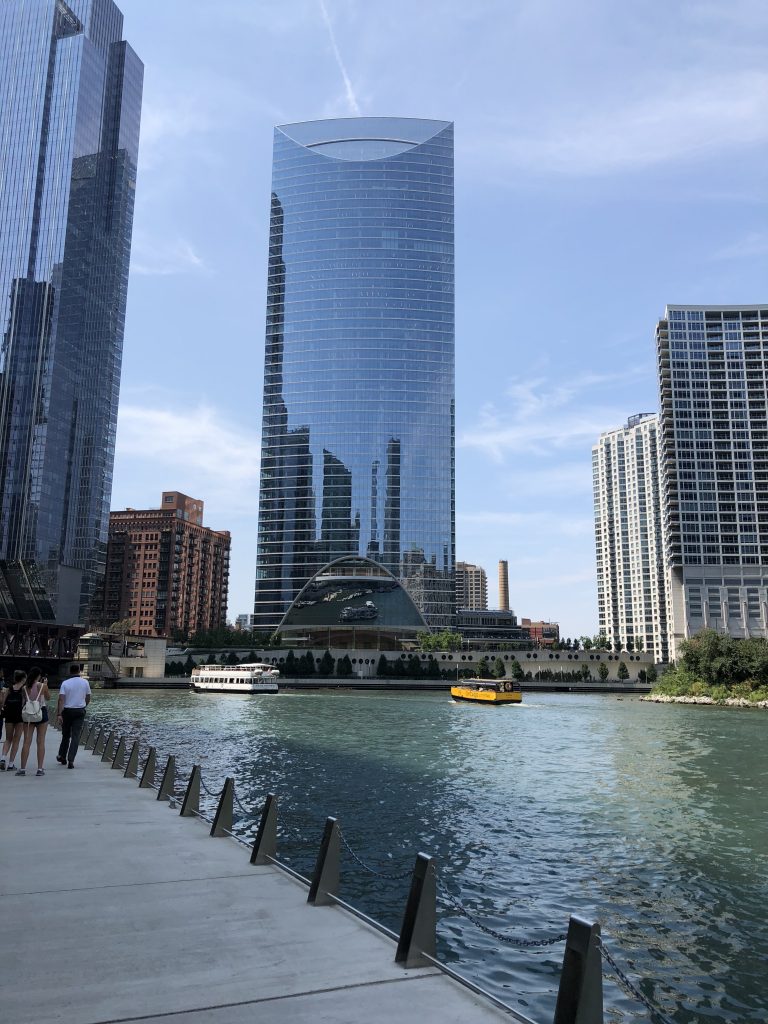 For Chicagoans and visitors alike, a geometric structural art installation called Black Tiberinus by Robert Burnier will be at the Riverwalk through May of 2019.  The Chicago Riverwalk will be the prime location for enjoyment of Art on theMART coming as well this fall with a large scale lighting installation on the Merchandise Mart.

Get out and about on foot, take a deep breath and explore one of the greatest cities waterfronts.