Vietgone,written by Qui Nguyen, directed by Lavinia Jadhwani, with original music and music direction by Gabriel Ruiz, is now in production at The Writer’s Theatre, 325 Tudor Court, Glencoe, through September 23, 2018.

“You should ne prepared to laugh; to be taken on a wild road trip; to embrace a deliciously theatrical storytelling vocabulary.” Michael Halberstam, Artistic Director

This is a play about the immediate aftermath of the fall of Saigon in 1975 and a sex-besotted couple who meet in a refugee camp somewhere in America’s heartland. The writing is fresh, filled with badinage and the personalities striking. The possible backstory is also very intriguing; the couple in question just might be the playwright’s parents. 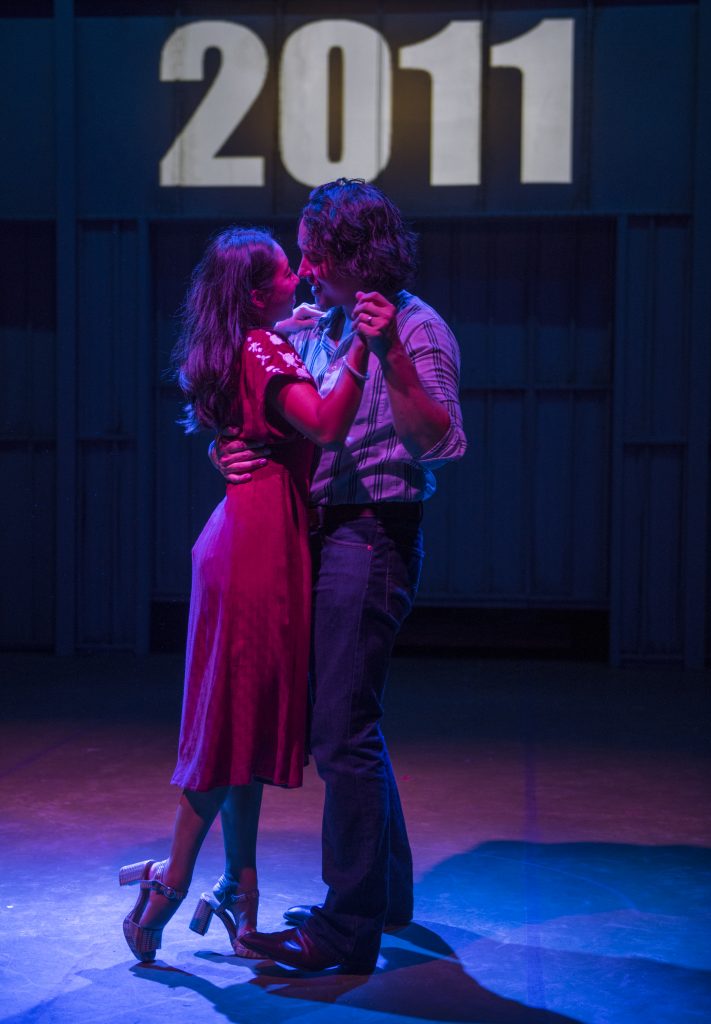 Quang, played with insouciance by Matthew Lee,is a cool and studly pilot who flees Saigon with his geeky buddy Nhan, played with believable nerdiness by Rammel Chan in a plane of refugees. He intends to return as soon as he can to bring back his wife and kids. However, the helicopter he has reconnoitered is shunted aside to make room for more arriving aircraft. Upon arrival at a refugee camp in Fort Chaffee, Arkansas, he meets Tong, played with fierce independence by Aurora Adachi-Winter.

The cast- most of whom portray multiple characters- also features Tong’s grouchy, meddling mother, Huong, played with great wit by Emjoy Gavino, and Ian Michael Minh, who is more than competent in numerous roles. Tong and Quang become very close right away, but there are plenty of issues to complicate the drama and keep the audience laughing.  Quang wants to get back to his family in Vietnam while Tong already has a local boyfriend, Bobby, portrayed with a desperate if idiotic sincerity as well as a numbskull fiancé-in training, Giai, both masterfully played by Ian Michael Minh.

The play is a tragic comedy; underneath the bedroom farce aspects lurks the real horror of this infamous war, the awful reality of refugee camps and the enforced breakup of families, all leavened by the life-affirming power of the procreative instinct, sometimes known as romantic love. Part of the fun is the language and diction, part Hmong, part hip-speak. When the action is taken 40 years ahead to 2011 , the accents actually are altered to account for the natural learning curve- and the dated clichés disappear- a brilliant stroke of writing and direction; kudos to dialect coach Vahishta Vadafari.

A few aspects of the production failed to impress; notably, the out-of-sync rap music that was actually puzzling and distracting, but obviously intentional as a device for storytelling. The stories here are rich in pathos and based in a world that changed radically for the characters involved. Some stories, however, have happy endings; if this is in any way an autobiographical endeavor by playwright Qui Nguyen, it is a tribute to his heritage.

For information and tickets to all the fine performances by The Writer’s Theatre, go to the writerstheatre website

All photos by Michael Brosilow

October 29, 2018 Elaine Mura Entertainment 0
Spread the love
Spread the loveWritten by talented Qui Nguyen and skillfully directed by Jennifer Chang, VIETGONE tells the tale of Vietnamese who fled the Vietnam War, only to find themselves stateless and in a strange new culture […]

December 19, 2021 Barbara Keer Entertainment 0
Spread the love
Spread the loveMy guest and I were very excited about the Writer’s Theatre opening.  We weren’t the only ones. As we entered the lobby (having shown our vaccination cards and IDs and wearing masks), people […]