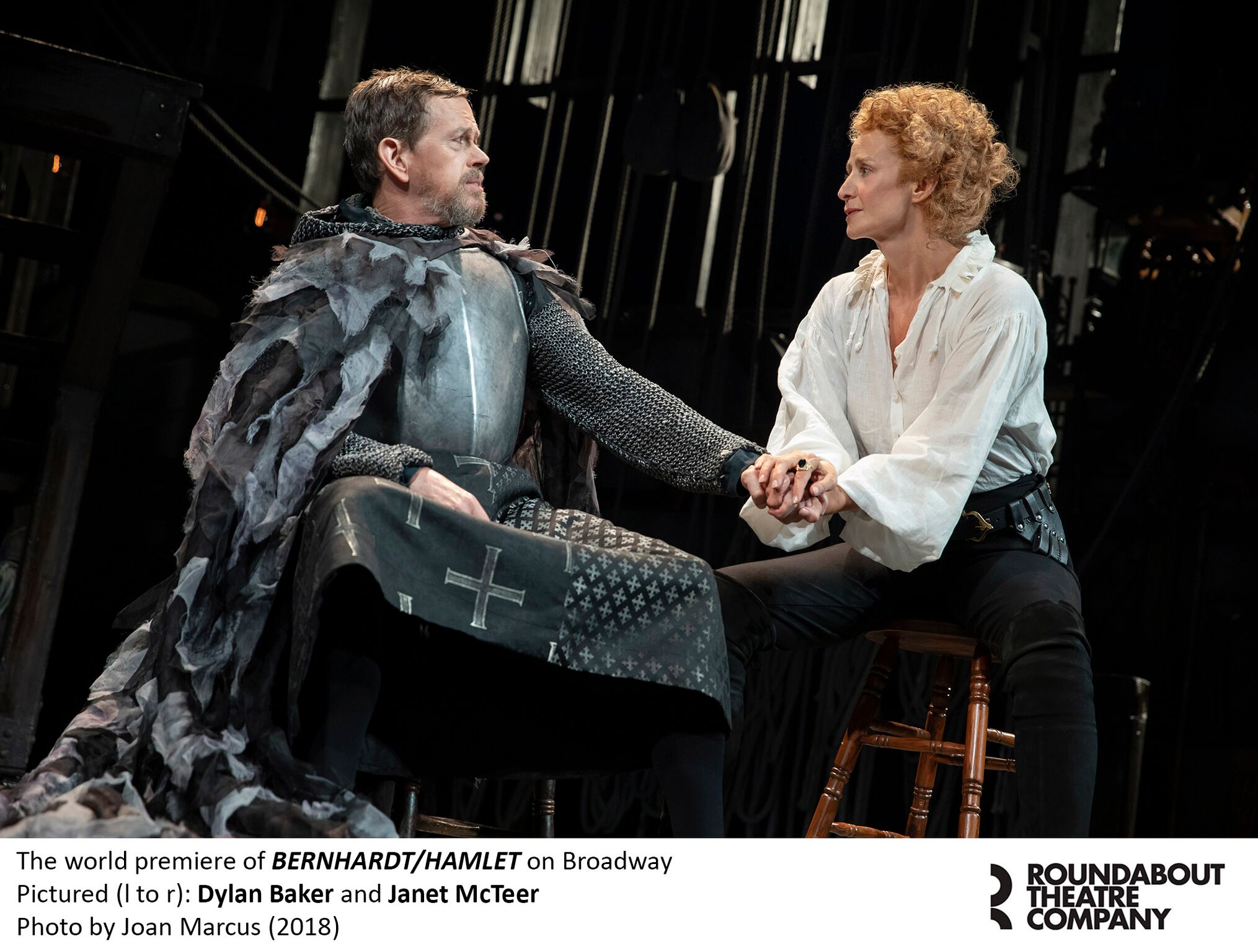 This night, thanks to the imaginative playwriting of THERESA REBECK and the astute staging of MORITZ von STUELPNAGEL, the remarkable JANET McTEER has brought back to our metropolis the electric thrill of witnessing Sarah Bernhardt’s moments of undoubted brilliance in assaying the role of HAMLET, as well as the even more thrilling display of “The Divine Sarah’s” struggle to assert herself on that most coveted and challenging of roles.  It was, of course, conceived by William Shakespeare for his friend and collaborator, Richard Burbage, undoubtedly when both of them were about 30 years of age around the turn of the 17thcentury. That Ms. McTeer  is fully up to that thorny task at hand is reason enough, avid theatergoer, to march, walk, RUN, to the American Airlines Theatre on 42ndSt. to witness this paean to an immortal actress of some hundred years ago, and to a play and part that has mesmerized the globe for more than four hundred. 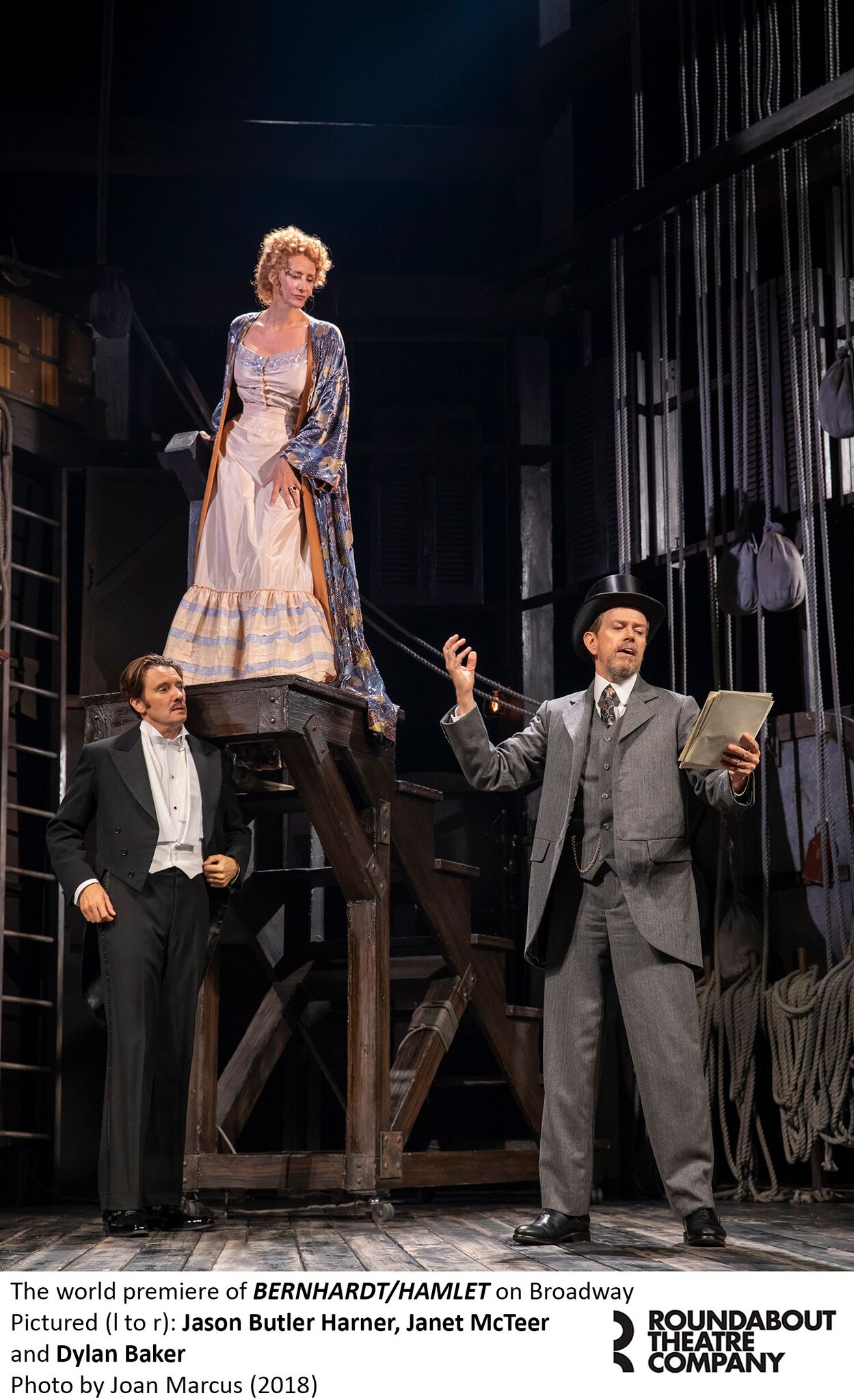 The delight that she alone, is NOT sole reason to make the journey to this stage in Times Square and the Paris of 1897, when Bernhardt is embarking on her first rehearsals at the enormous house she’s just leased, is that her support of players are right there with her in incisive, and often effectively comic, portrayals of the personalities with which Bernhardt surrounded herself for the task.

The fabulous DYLAN BAKER has the joy of delivering to us another immortal player from the French theater, Constant  Coquelin, the supreme actor of France of his day who was the first to play Cyrano de Bergerac  in Edmond Rostand’s glorious romance of love poetry and swashbuckling daring-do.  THAT playwright’s portrayal is effectively rendered by JASON BUTLER HARNER, serving simultaneously Ms. McTeer’s  Sarah’s thirst for his younger(and already married to another’s) love, and his overt genius as a playwright who had, prior to the time of this play, penned a spectacularly unsuccessful vehicle for his paramour , which despite its “critical success”, lost Bernhardt a fortune.  Now she is desperate  to recoup her losses with this , to many a Parisian , and later, English critic, “mad attempt” to play the Prince of Demark. 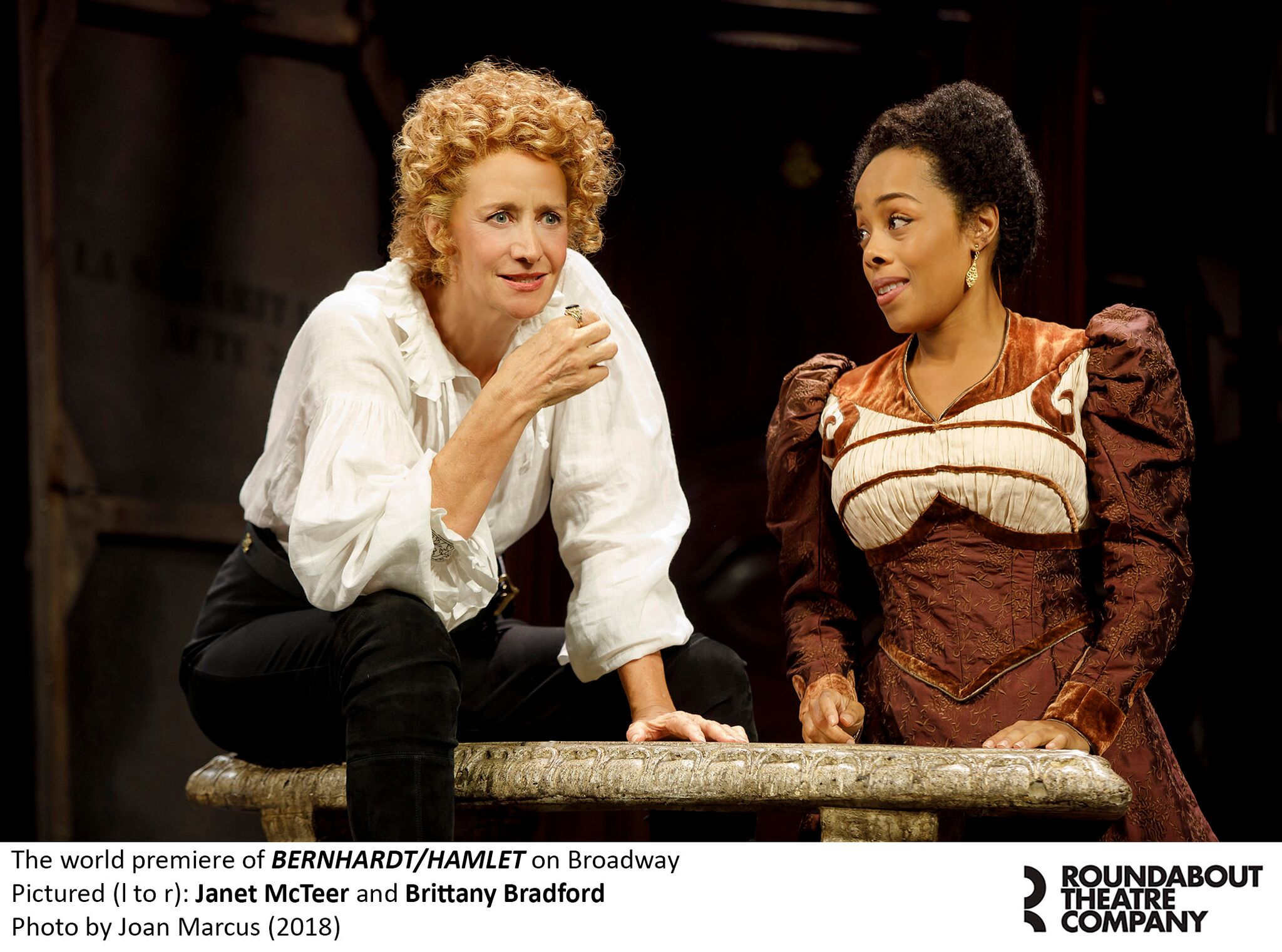 Point of fact, I feel called upon to impress upon the reader here, that Bernhardt’s  taking on the role of the Danish prince was far from unprecedented in the annals of Shakespearean female players. No less than FIFTY women from the days of when England restored not merely the monarchy, but the ability to attend the theater with WOMEN PLAYERS, coming with the reign of Charles II in the latter part of the 17thcentury, have been so noted in the critical record, with understandably uneven assessments. From Sarah Siddons( remember the opening scene from ‘ALL ABOUT EVE”?) of the 18thcentury to Charlotte Cushman of the latter part of the 19th,the female stalwarts tackling,” the observed of all observers”, all but littered the stages of England ,America and, parts of Europe well before France’s Grande Dame took her crack at it.

All that’s neither hither nor thither with Ms. Rebeck’s  account and Ms. McTeer’s   searing portrayal of an exquisite female personality of equal parts  monstrous ego, talent , and vulnerability, having the guts to go for broke, literally and figuratively. In truth, Bernhardt was on record saying that, despite her phenomenal successes from the year 1879 at thirty –five with the Comedie-Francaise with the roles of Medea, Ophelia, Cordelia, Desdemona, the original play version of Sardou’s Tosca, and with  utmost  renown, Racine’s Phaedra, that  she: “preferred not male parts but male brains”. And that” generally speaking, male parts are more intellectual than female parts.”  With this play, Ms. McTeer ‘s Sarah insists that Hamlet is a non-sexual nineteen year old , rather than the textual evidence of his being thirty in V,I,and questions the need for Shakespeare’s iambic pentameter to convincingly portray to tell his story. Her co-star, Mr. Baker’s Coquelin,states that he’d played the prince four times himself, and is now engaged to render his father, the Ghost, and Polonius. The rehearsal scene featuring these two players, AS players, of HAMLET’S   Act.I,  Scenes 4 and 5, with their comic inventions and inspiring revelations discovered in rehearsal, was for this reviewer, the highpoint of Ms. Rebeck’s first act. The qualities of these two actors in creating the perfect illusion of consummate actors honestly exploring the possibilities of trying to bridge the gap of loving relatives from the realms of life and death was beyond brilliant. 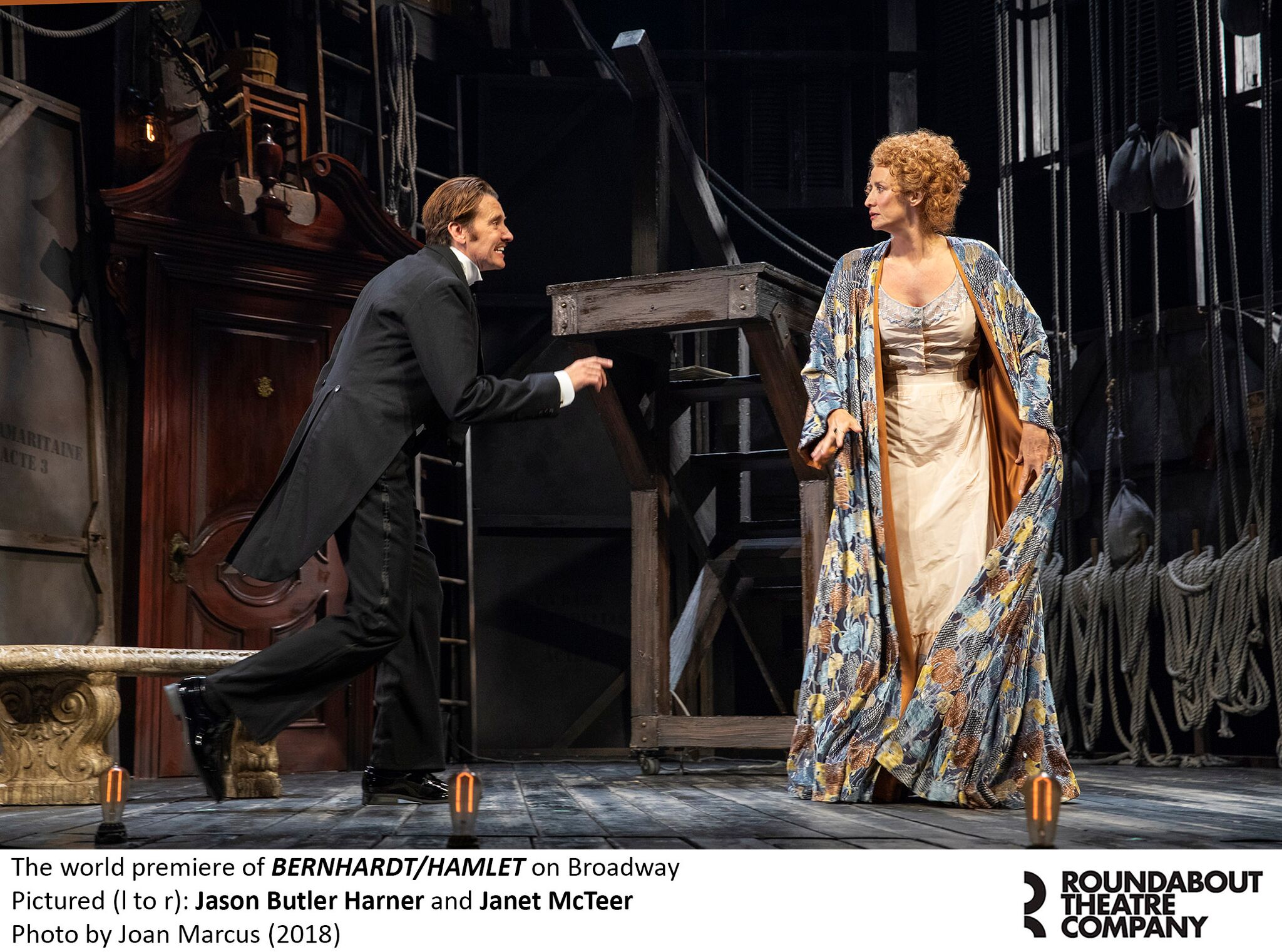 Ms. McTeer  exhibits with the Divine Sarah, someone who gesticulates continually on stage and off, yet with the one excerpt of Hamlet’s dialogue involving ,”What a piece of work is a man”, which consists wholly  of prose, we get the pertinent glimpse of Bernhardt’s welcome simplicity, devoid of gesture which of course, Hamlet in his advice to the players of III,ii, extols the virtues of such economy. And there we see the main reason why Bernhardt was convinced she would succeed only if the French translation of what’s been regarded as the greatest amalgam of verse and prose in the English language,  have the former ingredient  absent, and to have the heartbeat of the Bard’s poetry excised. So, she enlists her married to another lover’s Rostand ‘s genius to ,“rewrite Hamlet”!

Mr. Harner’s Rostand response is understandably forlorn and confused, spurred by his dueling love for his incandescent mistress, and his love for Shakespeare’s masterpiece, which, upon its assiduous perusal, dwarfs his estimation of his own gifts, and tortures his artistic integrity.  Rostand’s conversations with the French critic, Louis, with TONY CARLIN ably playing with conviction  the latter’s suspicions  of Bernhardt’s success with this project  of Hamlet devoid of verse, are compounded in this play’s addition of Bernhardt’s 35 year old son, Maurice( a talented NICK WESTRATE),also protesting the chances of his mother’s success in, what is a rather clever parody of Gertrude’s closet scene in Act III in the original ,of the pivotal confrontation of mother and son.

I must also honorably mention the playing of BRITTANY BRADFORD as Lystette( Bernhardt’s Ophelia) and ITO AGHAYERE, as Rostand’s knowing wife, Rosamond. That color blind casting of those two roles is employed by the brilliant Mr. Stuelpnagel’s   inventive and incisive direction, should probably not even be mentioned, and yet I do, with admiration.

Bernhardt/Hamlet is a play that resonates today with the overview of women and power. It may well echo in the chambers of our Senate this week. It really doesn’t matter how, Sarah Bernhardt was received in Paris and London in her production and enacting of this role.  Even with her most adoring reviewers, it was mixed, to be sure, but she was hardly ignored; and she continued for decades to dazzle on two continents. Without question, this daughter of France was, unlike her greatest rival, the Italian, Eleanora  Duse , an immense personality who put her indelible stamp on any and all roles that she undertook.

The fact that a bastard half-Jewish waif of 19thcentury France, particularly at the time when the greatest global of socio/political controversies was the Dreyfus Affair, from which she was far from silent defending the incarcerated unjustly accused army captain imprisoned on Devil’s Island, Jew, could and did command a fanatical audience of devotees in the thousands, is a most worthy subject for the towering talents of the most estimable Janet McTeer,  whose generosity of spirit, craft, courage, and love warrants, for a refreshing change, the standing ovation I witnessed and enthusiastically joined in on the night I was there.  Brava!