Imagine a crisp fall night, rain droplets brushing against you serve as a welcoming entrance to Strawdog Theatre where performers invite the viewers to partake in an immersive haunted production. Edgar Allan Poe’s short stories being the muse to this riveting performance, the interactive experience jolted the audience to participate in selecting their sights to the plethora of story lines. 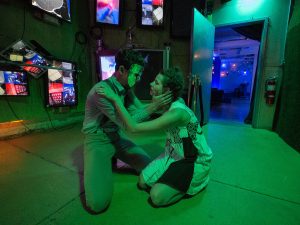 Entering, a sea of eyes through black masks peered through, a dimly blue lit room filled with curious spectators gathered, mingling with each other as the line to get in snaked along the entrance and the soft lights all around eerily flickered, to the right center a small, low stage. Walking through a foggy, dimly blue lit room with a mini stage sat to the right center of the room framed by an array of light fixtures covering the wall. Drinks are served at the end of the room where the bar sits nestled in between the Ravenswood warehouse turned artistic space, creative stage. An array of oddly arranged decorative light bulbs framed the wall of the platform as a flamboyant host announced the plans for the swanky soiree. Spectators were invited as VIP guests to an exclusive get together that promised to be an unforgettable evening. Preston, CEO of a lucrative family owned business, was being celebrated but not before his questionable past caught up with him.

Strolling through prop laden works of art, audience members marveled at the decor and set up of each unique set. Selecting the room to visit proved difficult as you were curious to know what was going on in each but the actors performed simultaneously in multiple areas. Being a part of a diverse set of scenes built momentum as the peak of the night gathered the mostly spread out audience into a close circle around the action. Get ready for some running, walking, talking, screaming, laughing, dancing party of a good time.

Figuring out the layout of each room at the onset of the performance allows a mental guide map to position yourself where there will be more action as the performers spill their stories in varied spaces so that completely understanding the entire potline merits a re-visit.

Exploring room to room as the plot unfolds bits and pieces, deciding which room to spy on becomes the biggest challenge. Stories in each creatively set up room garnered close attention from guests, some who crammed to catch glimpses of the scarier scenes. A caveat to the viewing of a multitude of narratives unfolding at the same time is that catching a coherent glimpse of the entire plotline was unattainable unless a group split up and conferred their findings with one another.

Traveling the spaces in and of itself was a creepy experience as the halls winded throughout and created a sense of visiting a haunted house, each scene becoming increasingly disturbing. Evoking slight feelings of a spinning bloody nightmare, being so close to the activity was a thrilling treat, just the right amount of spookiness on a foggy Halloween eve.

Performers played, danced, drank and turned murderous in this perfect date night out in a ghostly set up gallery of horrors. “Masque Macabre” will leave you scratching your head with mixed emotions as since the beginning of this modern take on a horror story experience you are not sure what is going on and remain in this thought with the urge to come back for more gore.

In Conversation with Brian DeRozan

December 13, 2020 Misty Schwartz Film, TV & Books 0
Spread the love
Spread the loveBrian DeRozan is an American Actor and Filmmaker. who was born in Oakland, CA and raised in the mid-west. He holds a BFA from Kansas State University where he played football before graduating […]

April 13, 2017 Tracie May-Wagner Women's Fashion 1
Spread the love
Spread the love Coachella 2017 is finally upon us, and 100K plus music aficionados, millennials, celebutantes, bloggers, groupies and posers of all shapes and sizes descend upon Indio, California to partake in the annual music […]