With two movies accessible to anyone at any time of day you’d assume there’d be no more to see with Disney’s Beauty and the Beast.  But Drury Lane’s new production, just in time for the holidays, shows you how wrong that assumption is. It’s magical in all the best ways and shows how live theatre can make the most familiar story new again. 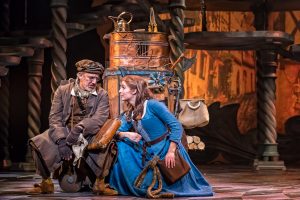 Drury Lane nearly always has brilliant set design for its very small stage, and the set for this one is no exception.  I know it seems odd to start with that, but the movement and interesting staging of the entire show is dependent on it. Using the stage’s conveyors, the set consists of a series of graceful raised platforms and staircases, which can be anything from quaint village to murky forest, to enchanted castle.  It allows the actors to move within the space and with a simple turn of the set this way and that, to create completely different configurations for different scenes.  The set, along with the lighting is masterful and designers Kevin Depinet and Ryan O’Gara should be commended.

Along the proscenium, there’s a tangled series of vines, which you initially notice are lovely and give the whole place a rustic, fairy tale feel, like the fancy illustrations in an old book.  And then the play begins and the Enchantress casts her spell on the Prince and boom, one vine lights up and you realize this is the magical rose, huge and looming over the entire castle.  It is spectacular in the very best way. It is used superbly throughout, each petal dimming one by one as the Beast and his servants grow ever closer to doom. This is a remarkably clever design and adds to the air of magic.  It’s also grim watching the petals go dark, and reminds you that there really is something at stake for the Beast and his servants amid all the fluff and fun of the story. 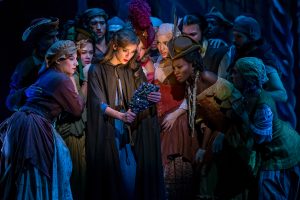 But, we’re all here for the songs and comedy and romance we know and love, and the cast springs happily into action from the very first acid test of Belle (or as comedian Dana Schwartz put it brilliantly on Twitter, Belle’s Mean Song), scampering about and doing lots of comedy business and generally swirling around Erica Stephan as Belle with her book. They all have terrific voices. They all dance well, which you’ll see again and again.  And you are wise to be reassured from this opening scene.

There is little to criticize in this production.  Everyone’s working hard and making it look quite easy, and nothing really falls flat.  So instead of quibbling about what wasn’t as good as everything else (why the tragic wigs?), I’m going to talk about what was great.

Because this isn’t either movie and is the stage production, you get extra songs.  All of them are good and move the plot and the extra dialogue explains things like 1) why Belle is such a snob (Maurice has told her she’s better than other people) 2) that the Beast is really crippled by depression (which Brandon Contreras leans into and makes him more sympathetic and sad than angry) and 3) You’d really like to hear a lot more about Mme. De la Grande Bouche’s scandalous past. 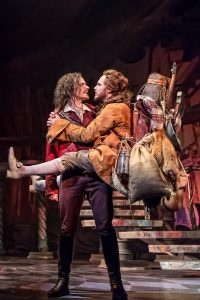 The entire supporting cast is absolutely perfect, led by Mark Banik as Gaston (who does an almost pitch-perfect recreation of Richard White’s vocal performance in the original animated film), Bri Studia as Mrs. Potts (anyone who saw her last year in Sweeney Todd at the Paramount knows how amazing she is and she nails the title song better than either of the gifted actresses in the filmed versions),  Tony Carter as a much randier Lumiere than you get on film, and Nick Cosgrove as a perfectly stalwart Cogsworth. Just look in the program and read their names and know they all did outstanding work, here. Paul Michael Thompson is a funny Lefou, Mark David Kaplan is a wonderful and daffy Maurice, Sierra Schnack a perfectly coquettish Babette, and Catherine Smitko makes the most of her Mme. de la Grande Bouche complete with some fabulous bejeweled Edith Head-inspired glasses. 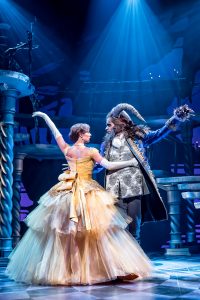 In fact, Belle and Beast are the least interesting in this production, but the heroes often are.  They are carrying the romance and everyone else is having a lot more fun. Contreras as Beast does a lot to make it his own. You feel his loneliness and sadness. Erica Stephan turns in a performance that is almost an exact translation of animated Belle to the stage, right down to word inflection and line readings identical to Paige O’Hara. 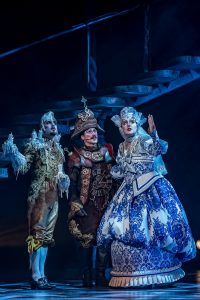 The only time you notice how small the Drury Lane is is during the massive production numbers.  Intelligently, the directors have not overloaded the stage, but after the Busby Berkeley-style production numbers in both films, you can’t help but notice the lack.  But every person makes up for it by being interesting and singing and dancing like mad.  It looks small but sounds perfectly big.  I can’t stress how well you can hear every bit of harmony and complexity in the singing coming off that stage.  Kudos also to Ray Nardelli for sound design.

And the costumes are also great (except for the wigs, really what is up with that? It seriously looks like someone cleaned out their shower drain and dropped it on Banik’s head.)  Belle’s gown is a combination of the animated film and the movie dress and floats beautifully in the requisite scene.  The anthropomorphized servant costumes are all good fun and don’t hinder movement.  And the fun 18th Century feel to it is all lovingly preserved.

All in all, it is a first-rate production and fun for the whole family.  It runs from now through January 27, 2019.

Tickets are available at the Drury Lane Box Office.

A Magical Mary Poppins at the Drury Lane

November 25, 2019 Suzanne Magnuson Entertainment 0
Spread the love
Spread the loveJust in time for the holidays, everyone’s favorite Disney Nanny flies to the Drury Lane Theatre in Oakbrook, IL in a production that is practically perfect in every way. And it’s going to […]

February 3, 2018 Suzanne Magnuson Entertainment 0
Spread the love
Spread the loveYou generally associate the Marriott Theatre in Lincolnshire with broadly crowd-pleasing fare like last season’s Mamma Mia! And Singin’ in the Rain. But their inclusion of Ragtime in this season is straightforward commentary […]

Fun Home at the Victory Gardens Theater Review – So Many Emotions

September 28, 2017 Suzanne Magnuson Entertainment 0
Spread the love
Spread the loveThe Victory Gardens Theater production of the Tony Award-winning Fun Home is a lot of things but the most important one is that it’s very, very good on every level. It’s well-written, has […]