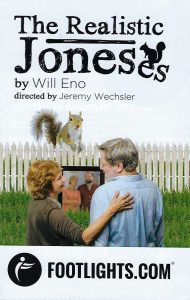 A dead squirrel makes an early exit from Will Eno’s affecting play The Realistic Joneses, now at Theater Wit in co-production with Shattered Globe Theatre. The squirrel corpse is swiftly transferred with a barbeque spatula into a plastic bag and tossed in a bin, but its spirit lingers. For make no mistake about it, The Realistic Joneses, though chockful of unexpected humor, is about mortality. More important, it’s about what precedes mortality: life itself, in all its moments, large and small.

The Realistic Joneses premiered at the Yale Repertory Theater in 2012 and opened on Broadway in 2014. The intimacy of Theater Wit is an ideal setting for this four-person play — all of them with the last name Jones. Even before the action begins, theatergoers can tune into Christopher Kriz’s subtle sound design, bits and pieces of broadcasts and sometimes just static. But even the static can be significant in a play whose characters do their best to listen to one another. For some of these characters, static is music to their ears.

The four Joneses are two couples living in a small northeastern town. The older couple, Bob (H.B. Ward) and Jennifer (Linda Reiter), have lived in their modest clapboard house for decades, taking refuge on their back porch in warmer weather to escape the mustiness caused by a leak inside that hasn’t been repaired. Jack Magaw’s scenic design speaks volumes, opening up in layers like the characters themselves.

The younger couple, Pony (Cortney McKenna) and John (Joseph Wiens) intrude on Bob and Jennifer’s back porch reveries to introduce themselves. They, too, are seeking refuge, having just moved into the neighborhood from their previous home, built over a toxic waste dump.

All four actors shine — McKenna, Reiter, and Wiens are Shattered Globe Theatre Ensemble Members — with Ward inhabiting his role so convincingly that it didn’t seem like acting, more like simply being the character. Kudos to all and to Theatre Wit Artistic Director Jeremy Wechsler, who directs the production with a nuanced hand.

Playwright Eno celebrates the ordinary with grace and originality, his staccato non sequiturs capturing the cadence of everyday speech while nurturing unexpected comic missiles. When the younger Joneses praise their new hometown for its good schools, Jennifer asks, “Oh, you have kids?” and Pony replies “No, it’s just that John hates stupid children.”

The characters interact as a foursome and then two by two, in ways that are at once realistic — as per the title — and unpredictable. You’ll want to keep up with these Joneses, who have something essential to say to all of us.