In Amor Towles’ 2016 novel A Gentleman in Moscow, a German visitor suggests that Russia’s only contribution to the world is vodka. A challenge ensues to name three more Russian strengths, and the title character takes up the dare, citing Russian writers, specifically Chekhov and Tolstoy, and then a scene from the ballet The Nutcracker. Finally, he seals his victory by nodding for Russian caviar to be served.

The Joffrey Ballet’s world premiere of Anna Karenina now at the Auditorium Theatre achieves that Russian troika: the storytelling of Tolstoy, the grace of ballet, and music as sumptuousness as caviar. Previous ballets have been based on the 1878 novel by LeoTolstoy, but this version is a revelation, an instant classic.

Much of the credit goes to an inspired partnership between Joffrey artistic director Ashley Wheater and choreographer Yuri Possokhov. Wheater and Possokhov met as dancers at the San Francisco Ballet, where the Russian-born Possokhov is now choreographer-in-residence, and both had long dreamed of creating a new Karenina.

Wheater had danced an earlier version of Karenina in the 1980s with the Australian Ballet, and that connection facilitated another inspired partnership, this one financial, between the Joffrey and the Australian Ballet, with the two companies sharing development costs. The ballet will premiere in Melbourne in May 2020. That cost-sharing enabled the team to commission original music by Russian composer Ilya Demutsky, a 21stcentury Prokofiev. The synergy of these talents mixed with the artistry of the Joffrey dancers results in a work of breathtaking beauty.

How can a doorstop of a novel about the adulterous Anna, whose fling with Alexey Vronsky, a military officer and the ultimate bad boy, be transformed into a ballet, especially one that ends with Anna throwing herself in front of a train? The program’s pithy synopsis of the ballet’s 13 scenes comes in handy for following the action, but much of the meaning comes across through expressive dance monologues. “You can understand what’s happening through the movement,” dancer Alberto Velazquez — who alternates portraying Vronsky with Dylan Gutierrez and Greig Matthews — said in a “Meet the Artists” panel discussion before the performance I saw.

Victoria Jaiani  — who alternates as Anna with Christine Rocas and Amanda Assucena — said that the passion of the story is built into every step: “It gives me butterflies every time I dance it. This will stay in my heart forever.”

That speaks to the power of Possokhov’s choreography, which mixes flowing, classical movement with modern touches. Ballerinas are not always en pointe. At times their feet are in full contact with the ground, with emotions conjured through bent knees and arcing arms. That connection to the ground recurs as they are dragged across the floor of the stage with seemingly impossible grace — by not resisting the movement they are complicit in it, much like Tolstoy’s complicated women.

Demutsky’s lush score is detailed with a libretto by Valeriy Pecheykin at the beginnings and endings of each of the two acts — vocal bookends to the action — hauntingly voiced by mezzo-soprano Lindsay Metzger. Music director Scott Speck conducts the capable Chicago Philharmonic. 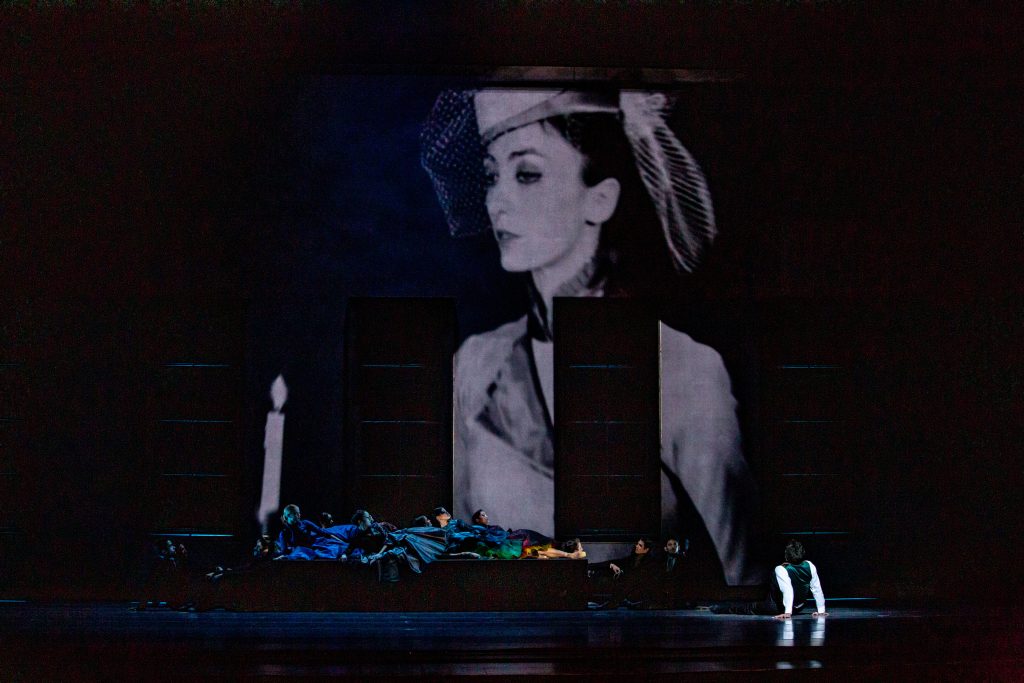 Images and live video by Tony-winning designer Finn Ross are projected onto sheer panels behind the dancers and do a lot of the heavy lifting to tell the story. Ross’s images are subtle, almost subliminal, and rely on the reduction of metonymy: in the opening scene, a train is represented by enormous wheels; Anna faces an approaching headlight in her final scene. Lighting design by David Finn enhances the staging, as does Tom Pye’s spare, flexible set.

Pye designed the glorious costumes as well — Anna has some nine wardrobe changes — and those too tell the story. Ball gowns in dark jewel tones reveal bright tulle beneath, as if exposing the sexual appetites masked inside. Princess Kitty, charmingly danced by Cara Marie Gary in the performance I saw, is innocence in pink as she is wooed by gentleman farmer Konstantin Levin (the lyrical dancer Rory Hohenstien).

Kitty and Levin follow the opposite trajectory of Anna and her husband, Alexey Karenin (the powerful dancer Temur Suluashvili). Kitty rejects Levin at first, but in the final scene of the ballet, after Anna’s death, they are living an idyllic life on Levin’s farm, with happy peasants tossing golden hay, evoking the mellowness of Midsummer Night’s Dream, staged by the Joffrey last year.

All of the Joffrey dancers shine in this not-to-be-missed ballet. Wheater promises that Anna Karenina will return to the Joffrey’s repertoire, and when it does, I plan to enjoy it all over again.