As always, musician extraordinaire Hersey Felder has yet again nailed the dynamics of an internationally acclaimed predecessor. Felder first premiered his vision of Debussy in northern California earlier this year. Currently, Felder brings the life, loves, and music of Claude Debussy (1862-1918) to southern California. Of course, as an inveterate Frenchman, any story about Debussy must include his love of Paris. Wherever he might travel, the lights of Paris would always draw him home.

Debussy’s early genius was recognized by the age of ten, when he was admitted to the prestigious Conservatoire de Paris, where he would remain for 11 years. But, even though he is considered to be one of the most influential composers of the late nineteenth and early twentieth centuries, he did not achieve fame until he was turning 40. Debussy was simply too revolutionary for the musicians of his day. To paraphrase Debussy scholar Francois Lesure, his music was marked by “tonal ambiguities” which simply did not mesh with the approach of his conservative musical contemporaries.

Felder studied Debussy extensively in order to encapsulate his essence in A PARIS LOVE STORY. To his surprise, Debussy proved to be a “prickly sort,” especially considering the gentle, other-worldly quality of his works. Debussy also turned out to be quite the womanizer, with two of his lovers even attempting suicide when he broke up with them. Today’s “Me Too” movement would probably have had strong opinions about his behavior with the ladies. But Felder also was struck by the level of rejection which Debussy experienced through most of his life, beginning in his childhood and continuing until his untimely death at the age of 55.

Debussy may well be one of the most difficult of Felder’s choices for the “Great Composer Series” – given Debussy’s tendency to swim upstream throughout his life, seemingly impervious to scandal and criticism. To his credit, Felder does an excellent job of recounting the high (and low) points of Debussy’s life while also letting the audience know just why Debussy’s music was considered so radical. Adding to the poignancy of Felder’s performance was something unexpected. Felder described some of his own personal challenges while growing up with a terminally ill mother who died when he was 13 years old.

Throughout the performance, Debussy’s melodies surround and punctuate Felder’s storytelling skills. Obviously a man of many talents, Felder also served as scenic designer, with lighting and projection design by Christopher Ash. Surrounding Felder are the elusive suggestions of places and people critical to Debussy’s development as a musician and a man. The entire production team does impeccable work to round out Debussy’s world. To quote Debussy in a 1911 interview, “I have made mysterious Nature my religion.” His mystical world comes alive in A PARIS LOVE STORY. Even though Debussy himself rejected the term musical impressionism to describe his compositions, the backdrop of A PARIS LOVE STORY and his sweeping, unpredictable melodies seemed to belie that statement. By the way, did you know that some people consider Debussy “the father of jazz?” 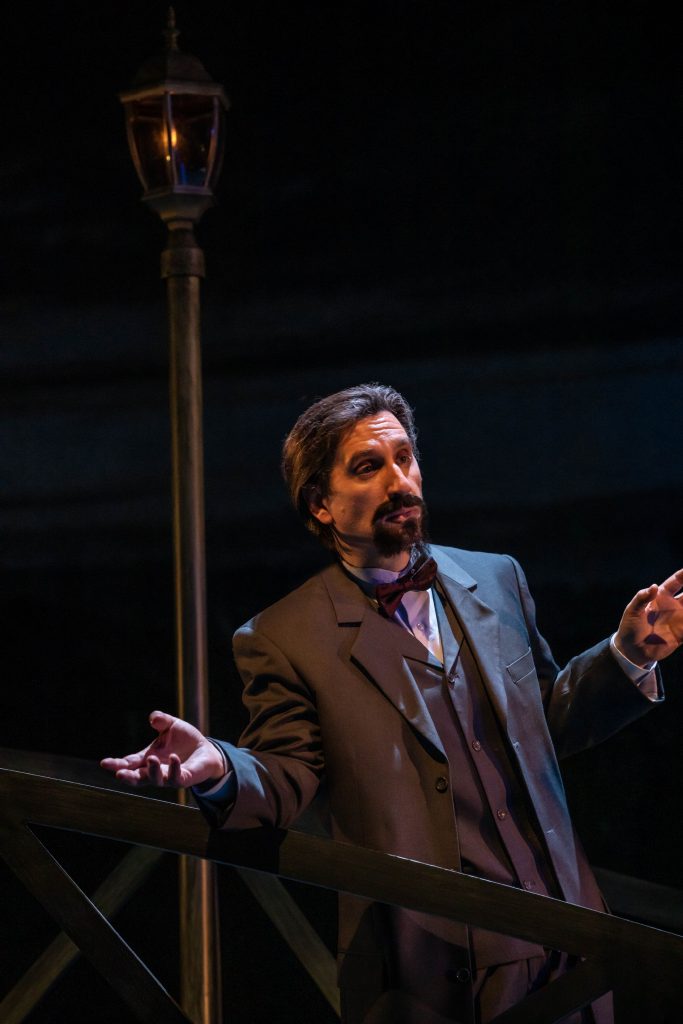 July 8, 2020 Elaine Mura Online Entertainment 1
Spread the love
Spread the loveHershey Felder is back! Even if he’s in Italy, the miracle of modern internet streaming has given him the opportunity to share his performance with the world. Named to Time Magazine’s 2016 Top […]

September 1, 2020 Elaine Mura Online Entertainment 0
Spread the love
Spread the loveRenowned musician and creative impresario Hershey Felder comes to the U.S. from Florence, Italy, with his solo production of the life of George Gershwin – courtesy of the miracle of modern technology and […]

Dante and Beatrice in Florence – Poetry, Music, and Love Join Together