Michael Feinstein didn’t just interpret the Great American Songbook at Ravinia Festival in Highland Park on Sunday night. He brought it to a whole other level! Nominated for five Grammy Awards for his PBS Specials during his three-decade career, Feinstein has played at the White House, Buckingham Palace, Carnegie Hall and other stellar venues. Feinstein brought his A-game back to Ravinia, where he has appeared 11 times since 1993 and took the audience along on a powerful, emotional musical journey.

Dressed in a dapper blue suit, Feinstein wowed the audience from start to finish with his humorous banter and impressive set list as a tribute to classic American music. He was accompanied by a talented 7-piece orchestra, whose sounds permeated the gentle breezes of the Ravinia pavilion.

He joked with the audience, “So, what have you been doing the last couple of years?” And, “if you like me, I’m Michael Feinstein. If you don’t, I’m Michael Buble!”

Influenced by George and Ira Gershwin, Irving Berlin, Duke Ellington and Bobby Short, Feinstein paid tribute to those famous composers and performers whose music has delighted generations.  Feinstein accompanied himself on the piano for many of the songs such as Marilyn and Alan Bergman’s, “Isn’t It Romantic?” On a beautiful night under the stars, it was easy to get lost in the music.

His emotional rendition of “Fly Me to the Moon” sung slowly with great meaning served as a tribute to composer Bart Howard and deeply touched the audience. Feinstein had a longstanding relationship with Ira Gershwin who he worked with for six years and became acquainted with many of Gershwin’s unpublished songs. He performed a medley of Gershwin melodies along with music from Cole Porter and Fred Astaire, who he called, “the quintessential interpreter of lyrics.”

Multi-award winning Broadway singer and TV actress and singer Betty Buckley joined him on stage for just a few numbers as well as the encore. Recently headlining the national tour of “Hello, Dolly,” as well as roles in “Cats” and “Sunset Boulevard,” Buckley remains the timeless storyteller of Broadway. She sang a few of her own favorites as well as joined Feinstein in lovely duets, highlighting both of their powerhouse voices.

Feinstein’s set list also included, “I’ve Got a Lot of Living to Do” from Bye, Bye Birdie and “You Belong to Me,” credited to Chilton Price. For his last song, he brought out his Frank Sinatra medley of “Old Blue Eyes’” favorites. But in the end, it was all about the man and his timeless music. 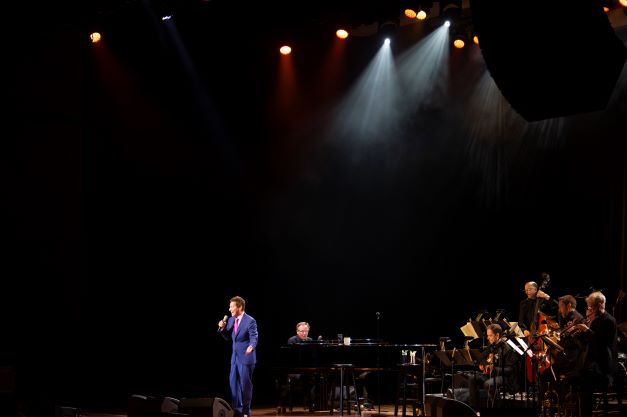 All photos courtesy of The Ravinia Festival
Tickets are now available for all up and coming shows at www.Ravinia.org

July 15, 2019 Mira Temkin Entertainment 0
Spread the love
Spread the loveJennifer Hudson made her grand entrance to the Ravinia FestivalPavilion on Sunday via the same aisle as patrons, dressed in a purple jumpsuit and accompanied by three horn players. She rocked the opening with […]