The film shoot of the action film series, Eye of the Empress” took place at a boxing gym. This exciting film shoot involved a fight club scene with an audience. 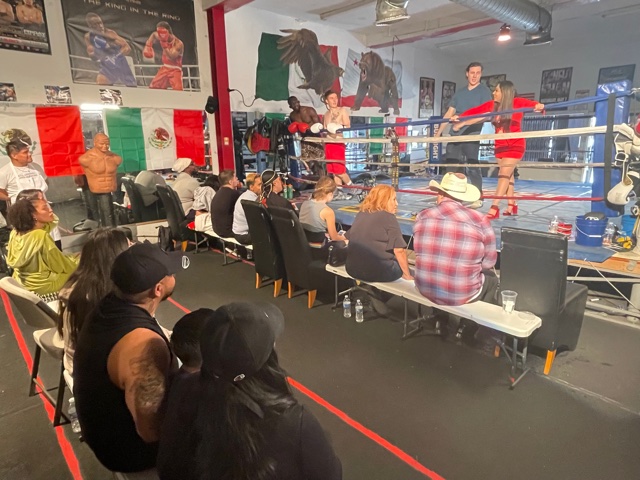 “Eye of the Empress” is filmed in the style of the Sergio Leone Spaghetti Westerns especially “The Good, Bad and the Ugly”) – incorporating some stylistic elements of the spaghetti western but is set in a landscape of urban rubble (such as scrapyards with trucks) and also with Mexican overtones involving some Mexican characters and mariachi music.

Twelve short episodes of “Eye of the Empress” have been filmed so far and these can be viewed on You Tube (sanjiniactress channel) and Vimeo.

Eye of the Empress on You Tube

This film shoot completed a scene in Episode 7 and Episodes 11 and 12 of “Eye of the Empress”. The scene was about a Mexican bad guy character, El Chico Malo’s (played by David Saucedo) street fight or fight club. El Chico Malo was busy in his office counting his money while the fight was going on. His bodyguard, Mercado played by Dominic Vedder made sure all was safe for El Chico Malo during the fight and helped him escape at the end when Jo, the fighter was shot and the audience ran out in a hurry.

The two fighters in the boxing ring were played by Jizzixious Bishop (played Black Tiger) and Drake Reyes (played Jo – one of Skylar’s lovers). The announcer, played by Joey Hurley announced the fight. Jim Francis Meza played the character who took in the bets from the audience. The sexy ring girls were played by Sasha Natalie and Janet Lopez. The bad guy janitor who shot the fighter, Jo (Skylar’s lover) in this scene was played by Pablo Ramos. At the end of the scene, there is a chase scene with Skylar running after this janitor who killed her lover during the fight.

Skylar (played by Sanjini Bhakta) comes into the fight club scene disguised as a short man or hombre with an elaborate mustache. She sits down to watch the fight involving her lover, Jo. Boris and Max (lead actor) come in and stand at the back of the fight club with plans of their own. They do not recognize Skylar in her disguise. Skylar is wanted by El Chico Malo and that is why she is in disguise. The janitor is quietly sweeping the floor.

The boxing fight continues for many rounds. It is an intense fight – exciting to watch. Towards the end of the fight, the fighter, Jo is suddenly shot in the forehead. Skylar says “bulls eye” and turns around to notice that it is the janitor who has shot her lover. While the audience is running out, Skylar slips out of the back and a chase scene begins in the alley with the janitor who she recognizes as “Mystery Man” (one who has the Empress Diamond).

The producer, director and writer of “Eye of the Empress” and this film shoot is Sanjini Bhakta. Sanjini funds all her movies and children’s books  –  with help from her father.

The cinematographer, Conrad Hunziker who has filmed many of Sanjini Bhakta’s films (including “Cyber Romance 2”) used a RED camera and many sets of lights to give the warm, yellow spaghetti western look for the film. The sound mixer was Philip Le Gault. The grip and gaffer was Austin Allan James. The production assistants were Charlie Blumberg and Dominic Vedder. The casting associate was Deon Rieux.

View “Eye of the Empress – The Street Fight” on You Tube:

All Sanjini’s films can be viewed on You Tube and Vimeo. They are all on IMDB.

About Sanjini Bhakta 13 Articles
Sanjini Bhakta is a writer, film producer and actress. She was born in Zimbabwe, Africa where she won many literary Eisteddfods and then went to Colleges in Oklahoma, California and Texas. She received her B.A. in History from University of Texas at Austin and her M.A in Speech Communications from Texas State University.
Website YouTube

June 4, 2021 Sanjini Bhakta Film, TV & Books 0
Spread the love
Spread the loveAltitude not Attitude” is an inspirational documentary that explores the “trips of a lifetime”, the daily obstacles, the psychological hurdles and the life of Michael Warkentin, a quadriplegic. In the early 1990’s, Michael […]