Thank you so much for doing this with us! Before we dig in, our readers would love to “get to know you” better. Can you share with us the backstory about what brought you to your career path?

I always wanted to be a filmmaker, since I was a kid and my parents took me to see the latest John Wayne movie — BIG JAKE — in the theater. Ethan remembered BUTCH AND SUNDANCE in the theater, I remember BIG JAKE. I made a low budget horror movie shortly after college and it got into Sundance, so that led to shooting television commercials. If you remember the SURGE soda commercials in the late 90’s, where kids would yell “SUUUURRRGE!!!” And then do something violent, that was me. Around that time I started helping out a young filmmaker named Chris Smith, who was making a documentary that would end up being “AMERICAN MOVIE”. I ended up editing the film, and got the bug for documentary editing working on that.

Congratulations on your recent documentary series, “The Last Movie Stars”, tell us more about that project and what it means to you? 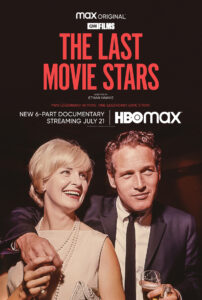 This project is very important to me — such a great opportunity to study the lives of these two icons and really get to know them and learn from them. Nearly every day Ethan and I would watch material that I edited and talk about it. His comments weren’t really notes, per se — they were much more interesting and valuable — it was a philosophical conversation about what the material means. What their lives mean — what is our Point of View on it all? How to make it unique. How to really listen to their lives and let that guide our narrative. When he sent me the Tennessee Williams quote that now ends the film, that ends with “We live in a perpetually burning building, and what we must save from it, all the time, is love.”… I knew that was what we needed to build to — that this what what we wanted audiences to take away. So I guess, in the end — that’s what I learned.

Can you share the most interesting story that happened to you since you started editing and working with legendary producers Martin Scorsese and Director Ethan Hawke, among others?

The day that Ethan went to meet Martin Scorsese… he got the call that Mr. Scorsese wanted to meet with him and he was so nervous. He called me right after the meeting and was ecstatic — “he really thinks the film is great!” The joy of it — that I shared as well… a bucket list item having one of your idols from the time you were a child say, ‘good work’ is something that I’ll never forget.

Are you working on any other exciting new projects?

I am hoping to edit again for Ethan and am also developing and producing a couple of projects with my production company, September Club.

Is there a particular person who you are grateful towards who helped get you to where you are? Can you share a story about that?

John Pierson and Janet Pierson are two people who have helped out so many filmmakers, and whom I appreciate so much. John was the leading Producers Rep for Indie film back in the 90’s, discovering the likes of Spike Lee, Kevin Smith, Richard Linklater and Michael Moore, along with many others. Janet, his wife, worked alongside of him in those years, and now has stepped far, far out of the shadows and runs the SXSW Film Festival in Austin, where she continues the family tradition of discovering and championing voices from outside of the mainstream. I was a kid from Wisconsin with no connections in Hollywood or New York, and John and Janet popped in a VHS tape that we blind-submitted to them — the first movie I directed, liked it, and advised me and my co-filmmakers on a path forward. Nobody else would have done that at that time. And they did it every day, for so many people. It’s what they did.

From your experience, what are a few ideas that we can use to effectively offer support to others who want to work in the entertainment/film industry?

Build a network of people that you can count on. Don’t be afraid to fail — failure is essential to growth. Everything is storytelling. I can cite cliche after cliche — but those cliche’s exist because there is truth in them.

Can you please give us your favorite ”Life Lesson Quote”? Can you share how that was relevant to you in your life?

I think I will share one from THE LAST MOVIE STARS. “If you are going to crash, crash decisively.” I will leave the relevance up to the reader.

You have been blessed with an illustrious career. Have you thought about writing a book to document it and share with others?

No, I don’t think I am book worthy — at least not yet.